Gary Payton II Making An Impact For The Warriors 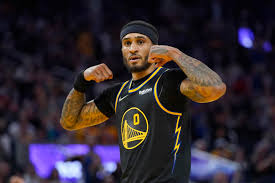 Gary Payton II is making an impact this season with the Golden State Warriors. While only averaging 6.1 points, 3.2 rebounds, and 0.9 assists in 13 minutes per night, he is still impacting the game on the defensive end and as a glue guy.

Payton, who has mostly bounced around in the G-League for the past few seasons, currently leads the NBA in an estimated defensive plus-minus. Payton is taking after his Hall-of-Fame father, Gary Payton, one of the best defensive players in NBA history.

While Payton does not look for his offense much, he is shooting 29-36 from two-point range, which is good for 80 percent, and pretty much means Payton shoots primarily high percentage shots. Payton is shooting 68 percent from the field on the season.

Payton is at the top of the NBA in steal percentage for combo guards, according to Cleaning the Glass, and leads the NBA in deflections per 36 minutes.