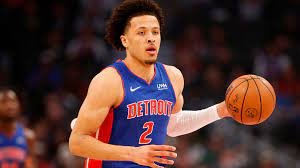 The No. 1 pick of the NBA Draft Cade Cunningham finally made his rookie debut on Saturday night in the Detroit Pistons 110-103 win over the Orlando Magic. Cunningham missed the entire preseason and first four games of the regular season because of a sprained ankle in training camp.

On Friday, Cunningham went through team drills and was cleared to play 20-25 minutes on Saturday. Cunningham struggled in his debut scoring only 2 points on 1-8 shooting from the field and 0-5 shooting from beyond the arc. However, the rookie did grab seven rebounds and two assists in 18 minutes played. Only one other rookie scored two points in his debut, and that was Anthony Bennett in 2013 for the Cleveland Cavaliers.

Although Cunningham’s shot was not falling, he did move well and played some solid defense. When you are out for a while with an injury, it is essential to go out and prove that the injury is fully healed. Also, there were probably some rookie jitters going on. However, with one game under his belt, I expect Cunningham will have a much better game next time out.

“I think it was good,” Cunningham said. “I feel like coming in, just being able to make some plays off the ball, get some rebounds. I felt like I was solid defensively. And, I mean those are the points that I really wanted to come out and just prove to myself that my ankle was straight and that I could move, guard and do everything else. So, I got all the jitters out now, and now I can just go play free.”

It will take Cunningham some time to get in basketball shape and get his legs up under him. It will take a couple of games for him to adjust to the NBA game, but Cunningham will be fun to watch this season.