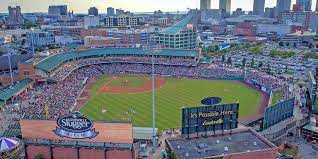 I had been wanting to see a Louisville Bats game this season and hadn’t quite decided on when or what game in particular I might want to watch. I live close to Louisville but am just far enough away from downtown to not be a regular at the games. This week’s series was against the Nashville Sounds, which normally would not mean much to me (being more of a college fan). However, Corey Ray is a member of the Milwaukee Brewers franchise and currently playing for the Sounds.

I circled the field several times trying to find a parking spot, trying to figure out why so many people were here to see the sporting event. I finally found a parking spot in a random lot that had no signs prohibiting tailgating or prolonged parking and took my que. After walking for what seemed like forever, but was probably only a few blocks, I get inside to a park as beautiful as you can expect from the minor league franchise.

I arrived in time for second inning to find the Sounds ahead 3-0. After walking around, seeing where everything is and fulfilling more primitive instincts, I settled into the right field concourse in time to see the Bats hit a double and then followed with a quick solo home run to tie the game at three.

Corey Ray was one player in particular that I was keeping an eye on. A Louisville alumnus is enough to get my attention but keeping in mind that he was the second highest drafted player in the draft just a few years ago makes me wonder how unappreciated this young man is. His ability to get on base is one thing, but his ability to move between the bases is what has always fascinated me about this young man for years. He finally got his chance on a base hit into mid center field early in the third. Once on base, he immediately focused on moving to second, but was caught a little too far out, getting called out on a lazy throw.

Before I go further, I think it is only fair to acknowledge the fanfare involved in tonight’s game. The Louisville Bats used one of their alternate personas as the Louisville Mashers. Calling back to their local fame with bourbon distilleries, the Mashers’ mascot is a bourbon barrel and colors hue to a sky blue with red accents.

As always, the best parts of the game were the things such as a kid catching a foul ball off the concourse and immediately running full sprint to share his new found treasure with his family or different kid trying to climb onto the awning to retrieve a home run ball. I have no stats for these phenomenal plays or names to credit but hats off to all those kids who keep these games fun.

Jose Barrero caught a pitch in the fifth that looked promising but was fielded closing the inning for the home team. Later, in the same inning, hometown hero, Corey Ray scored a solo home run to bring the game to 5-4. It would take until the sixth before the Bats were able to tie it up by this point, both teams were changing pitchers so much, it would make your head spin. The constant personnel exchange stretched the stalemate into the 10th inning before the home team finally put it away in time for the fireworks show.

To be honest, I’m not sure how many of these guys have a future in the show but from a fan viewpoint, a lot of them have a potential of growing an individual base to give them the push to progress as far as they are able to. Slugger Field is a great stadium for the under appreciated die hard Bats fans and possibly one of the best kept secrets in baseball. Hidden by the skyrise, facades and overpasses, this ballpark really delivers when you are looking for a unique baseball experience.