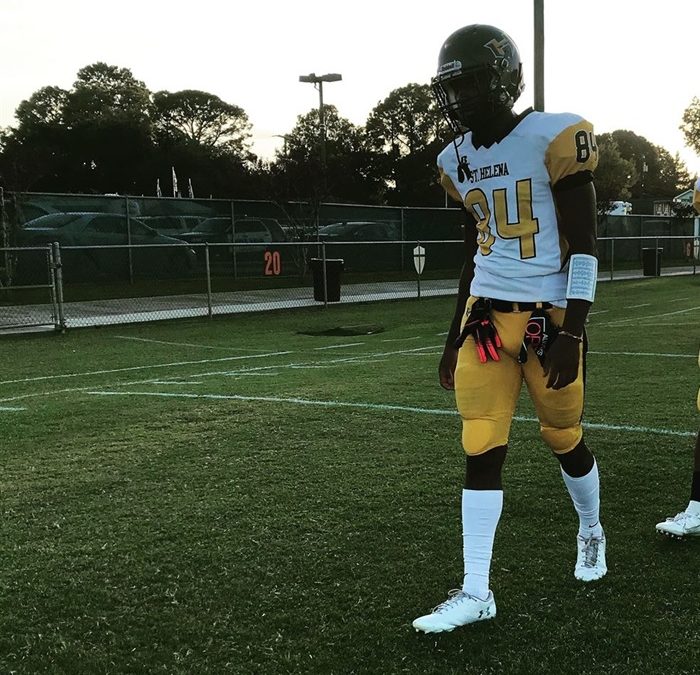 Jency Riley is a 6-foot-5 tight end in the class of 2021 who is committed to Jackson St. Jency is going to have a great career at Jackson St.

Q. What made you commit to Jackson St.?

Q. What does it mean to you to go to a HBCU?

A. It means a lot. Like everything that’s been happening these past few years it means a lot to go to an HBCU and just be able to be one of those guys to say, “Hey, I made it.” from an HBCU. From Shannon Sharpe, Michael Strahan and Walter Payton, you know they went to HBCUs and did their thing and I want to be like one of those guys.

Q. What are you looking to accomplish at Jackson St?

A. I want to win the SWAC every year I’m there. If we move out of the SWAC, I want to win wherever we go. I just want to win. It’s a team thing. If it’s a personal thing I would like to be an All-American and do my thing in school for three to four years. Then go get drafted to the NFL and pursue my dreams of playing in the big leagues.

Q. What path do you want to take right after Jackson St. Will you want to go straight to the NFL Draft or would you see yourself taking a spring league to CFL to NFL type of road?

A. Straight to the NFL with Coach Prime and the other coaches. They know everyone and I’m being coached by the best so if the CFL is the road I have to take I’m fine with that. That being said, I plan on going straight to the NFL.

Q. How do you think your style of play will fit into Jackson State’s offense?

A. I feel like it’ll be good because they like big wideouts and I’m a bigger tight end. I play similar to Kyle Pitts. My versatility will help since I’m not just a big, fat tight end who can only do one thing. I’m an all around player and I feel like I can help us a lot.

Q. What was the recruiting process like with Deion Sanders?

A. It was strange because they offered the day before signing day. I was about to commit somewhere else and I remember the day before I was on the phone with Coach Taylor and he was like I got something I have to tell you. come to JSU. I told him you give me the offer I’m going to commit. I got the offer, I committed the next day, I signed the letter of intent and a week later it was my first time talking with Coach Prime. As soon as you graduate we need to get you up here so we can start rolling. It was crazy getting on the phone with him when he FaceTimed me. I was like this is crazy, this is Deion Sanders right now. In a couple months I’ll play at his school for him as a head coach.

Q. You finished your last high school season with 17 touchdowns and 1,200 yards. How does it feel to be St. Helena’s best player ever?

A. It’s pretty good. You got a lot of guys that played before me like Chris Davis and Ryan Burgess. I feel I may not be the absolute greatest but I feel like I’m up there with them. It feels great because I’ve been here my whole life.

I would like to thank Jency because it’s not every day you get to talk to what could be the next great HBCU player.