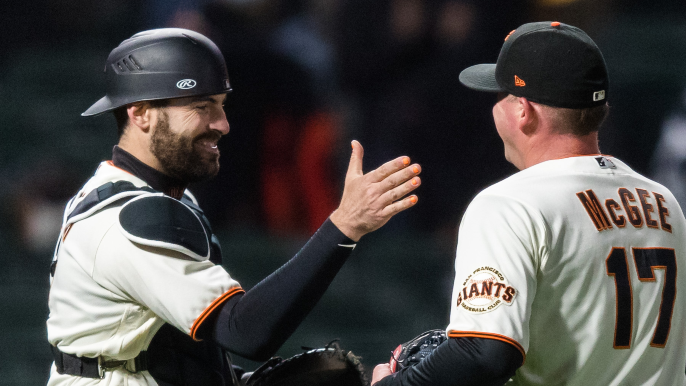 The San Francisco Giants beat the Miami Marlins Thursday night 3-0. Catching for the Giants was Curt Casali, the Giants’ backup catcher. It was the fifth consecutive shutout that Casali had caught this season.

Via MLB.com, “As a catcher, I pride myself on defense, game-calling and receiving-first,” Casali said. “That kind of gets my hitting spat on a little bit, but for it to finally come to fruition and get a little bit of recognition is pretty cool.”

Casali became the fifth catcher since 1900 with a shutout streak of at least five games. He joins Francisco Cervelli, Chris Holes, Alan Ashby and Ed Phelps.

Casali has caught five different starting pitchers in the streak, Alex Wood, Johnny Cueto, Anthony DeScalafani and Kevin Gausman. Casali is playing great defense and calling good games behind the plate. Last night he even did some damage behind the plate, hitting a two-run single to give the Giants a 3-0 lead.

Casali and Buster Posey both have done an excellent job handling the Giants pitch staff; they are currently fifth in the MLB with a 2.94 ERA. Pitching was supposed to be a weak spot on the Giants roster, but it has been the strong point so far this season. Casali and Posey put in a lot of work this season to help the pitchers out. Via ESPN.com, “Me and Buster have worked really, really hard behind the scenes. It feels like, finally, it comes to the forefront. I’m pretty proud. Obviously, l’m not the one throwing the pitches.”

It will be interesting to see who will be catching for the Giants tonight.