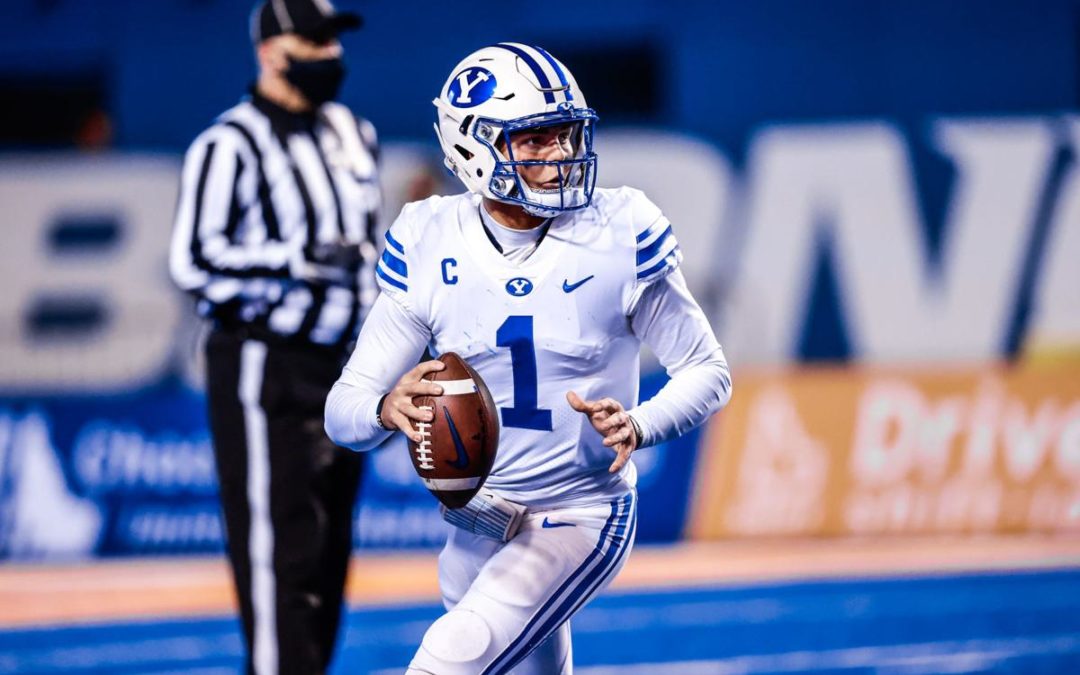 Every year it seems that the closer we get to the draft the more we start to hear about how good the quarterback class is no matter what the thinking was prior. This year is no different, as we started the NFL offseason saying that this was a one prospect draft in Trevor Lawrence. Now we are hearing names like Zach Wilson, Justin Fields, Trey Lance, and even Mac Jones. I is so hard to know what to believe and what not to believe and to know what your favorite team will be getting with one of these guys. No worry, I am here to break it down and show you an unbiased view of all the best quarterbacks in this year’s draft.

It feels like we have been talking about Trevor Lawrence for a decade now. He was a highly touted recruit that ended up starting his freshman year in 2018 when he took the nation by storm with 3,280 yards and 30 touchdowns and beating Alabama in the National Championship game. In 2019, his success continued with 3,665 passing yards and 36 touchdowns but losing to LSU in the National Championship. Finally, this past year in 2020, Lawrence dominated again with 3,153 passing yards and 24 touchdowns and in just 10 games. This is also not including the fact that he did all of this while averaging over 60 percent completion percentage. Lawrence is not your average college quarterback and has all the tools to be a super star in the NFL. Drafting Lawrence means getting an NFL ready quarterback that can make any throw. Lawrence is the most ready prospect since Andrew Luck and has the potential to be one of the top-5 quarterbacks in the NFL for a long time.

The more I watch Wilson the more impressed I am with him. The problem is that it’s one good year with a rather weak schedule. This year he threw for 3,692 yards and 33 touchdowns at a 73.5 percent completion percentage. All very impressive numbers even playing against lower competition. When looking at a prospect from a school like BYU, you want to see that he absolutely dominates and Wilson did just that. You also must look closer at things like his form, vision and athleticism, which you can go ahead and check all those boxes off for him. He also has a good NFL frame at 6-foot-3 and 219 pounds. So, your biggest concerns about Wilson in the NFL are level of competition, lack of experience and there are some questions of character as well. Zach Wilson could be a very good quarterback at the next level but will need some time to develop and learn from mistakes. He has an elite arm and can make every throw. He is also athletic enough to escape the pocket and make plays on his feet.  His mindset reminds me of Baker Mayfield in that he wants to win and is not shy about it.

This was hard to put Justin Fields at No.3 and part of me wanted to do a 2a and 2b as a cop out. The ultimate decider though was that Fields only played eight games in total and it was an inconsistent eight games. He struggled against some of the top defensives he faced, throwing three interceptions against Indiana and then only completing 44.4 percent of his passes and two interceptions against Northwestern. However, he followed that up with a great game against Clemson in the playoffs. He battled through injury and threw six touchdowns and 385 yards. Fields has all the tools to be an elite quarterback in the NFL. He is a freak athlete with a huge arm, but has some habits that could restrict his growth. He panics when under pressure, does not have the best awareness in the pocket and is very lazy going through his progressions. There was also the recent report from Dan Orlovsky that he was hearing things like Fields is the “last one in, first one out” and that there were some serious questions concerning his drive to get better. Though unconfirmed this could explain some of his bad habits. A team drafting Justin Fields are getting a freak of nature athlete that will have an immediate impact on his team. They will also be getting a guy with unlimited potential and could very well be the best quarterback in this draft. The issue is he is a project for sure and his inconstancy at the college level could be a habit that continues in the NFL.

Trey Lance is the big question mark of this year’s draft. Trey has incredible, raw talent and is certainly going to be project in the NFL. But his potential is limitless. North Dakota State opted out of the 2020 season but ended up playing one game this year where he looked about average. His 2019 campaign was absolutely ridiculous. He completed 67 percent of his passes and threw for 2,786 yards and 28 touchdowns. He also ran for 1,100 yards and had 14 rushing touchdowns. The Bison relied on Lance to do almost everything for their team and he delivered. As a passer, Trey Lance shows the ability to make every throw in the NFL. He has an extremely accurate deep ball and can extend plays with his feet. However, he tends to take off and run when his first read is not open, which means he struggles to go through his progressions. If this problem cannot be fixed Trey Lance will struggle at the next level as a passer. The other concern is lack of experience and the lower level of competition at North Dakota State. Lance has the ability to join his fellow alum Carson Wentz at being an NFL starter to an NFL star.

I struggled to put Mac Jones this high because I do not see a large difference between him and the remaining quarterbacks in this draft. Yes, Roll Tide fans may scream at me for saying that and even mention his 77.4 completion percentage, his 4,500 yards thrown and 41 touchdowns. I would say college production does not always mean NFL success. Some fans have said things like he is just as good as Joe Burrow, which is just not true. His college production was exceptionally good last year but we all know that Alabama is essentially an NFL minor league team with elite talent all over the field. It also helps to have a Heisman winning wide receiver on your team. But besides the talent around him Jones shows some issues in his game that will hurt him at the NFL level. He tends to locked on his first receiver and not go through his progressions. Jones has some trouble reading defenses and recognizing blitzes. Some rave about his pocket presence but then in the same sentence say he does not have pocket mobility. Meaning he cannot move well within the pocket. His DUI conviction also raises questions about his character. To me, Jones is a future game manager in the NFL. Meaning he is not going to make a lot of mistakes and will throw the ball to the right person. However, it also means he will never be the guy that takes the risk of throwing ball into coverage to win a game. I would put a second to a third-round grade on him because of this. I know he will go in the first round but that does not mean he should.

I want to mention two other quarterbacks that we could see be taken on the finals two days of the draft. Kyle Trask from Florida and Kellen Mond from Texas A&M. Either one of these players could end up being the steal of the draft.

Kyle Trask is 6-foot-5, 240 pounds and is probably more deadly in the pocket than Mac Jones. The issue is that he tends to be a statue in the pocket and is slow to react to blitzes. If he works on his footwork in the pocket while under pressure, as well as, improves his anticipation, he could make a team extremely happy on Day 3 of the draft.

Kellen Mond has good NFL size and a quality skill set. Though he is inaccurate at times, he is extremely athletic and can make plays on his feet. He needs to work on his fundamentals and will be a project for any team. Fixing so many issues may be hard for a team which is why he is not evaluated higher, but if he and a team are willing to take the time to address the issues in his game, they could get very good quarterback for a long time.

To sum it all up, this quarterback class has a lot of guys with potential but only one that is really a guarantee in Trevor Lawrence. Zach Wilson, Justin Fields and Trey Lance will all need an organization to fully commit and help provide them with the resources they need in order to develop. If they get this then all of them have to potential to be exceptionally good to great players in this league for a long time.