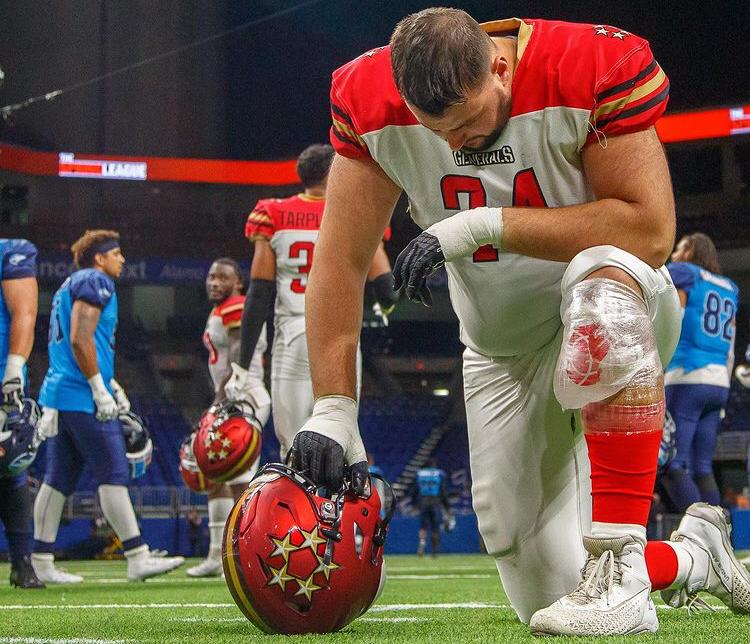 Blake Camper is a name that should be very valuable on your free agency board this year. Camper just recently finished his time in The Spring League, winning a championship with the Generals. He made his name known in The Spring League and really deserves a chance to prove himself in the NFL. Back in 2019, the Los Angeles Chargers signed him for a bit but mainly just for camp.

New episode is live on Spotify and Apple Podcasts!!! Great interview with @CamperBlake and more!!!https://t.co/NPjuBsYnMP

Prior to The Spring League, he played at South Carolina for the Gamecocks in the SEC.

“My favorite college football moment would have to be when we won in overtime against Missouri,” Camper shared.

At South Carolina, he played primarily on special teams but also made some starts on the offensive line – 10 being at right tackle. Camper has a massive frame at 6-foot-8, 310 pounds, which are both elite sizes at any level of football.

“What separates me from other players is my work ethic, my dimensions (I have long arms) and my athleticism,” Camper said.

In this year’s NFL Hall of Fame class, one of the best lineman ever to play will be inducted inAlan Faneca. The former New York Jets and Pittsburgh Steelers lineman is someone that Camper enjoys watching film on and uses to model his game after.

“My favorite player to watch in the NFL is not a current player,” Camper said. “It would have to be recently inducted Hall of Famer Alan Faneca. He was an unbelievable player and technician. He was a great teammate and embodied all the great traits that you would want in a player. I really enjoy turning on his tape and watching him work.”

Continuing on people that inspire the former General, he shares someone in his life that inspires him to be his best.

“My biggest inspiration would have to be my older sister,” Camper shared. “She was a Division 1 soccer player and played in the pros for a few years. She overcame three torn ACLs and ended up being a high school and collegiate All-American.”

As mentioned earlier, Camper played for the Generals in this past season of The Spring League and won the championship. He played right tackle in front of MVP quarterback Bryan Scott during his historic MVP season. Camper wore No. 74 for the Generals.

“The best memory that I have from The Spring League would have to be the championship,” Camper said. “The feeling of winning that game with great teammates is something I will never forget.”

One of the most underrated moments in the championship game has to be after Scott took the ball himself for a touchdown. After he scored, Scott, Camper and the linemen had some fun on the sidelines. The Generals had great camaraderie all around, which led them to their undefeated season.

Make sure to check out the film for QB Bryan Scott (@BryanScottQb) who had a workout with the #Colts today!! He does not get enough credit for being a beast.

Those are Bryan Scott’s highlights but include Camper in them too. Be sure to watch No. 74. The Generals lineman completely eats defenders. He should be on an NFL squad.

The last professional football champions to be crowned…the #TSL2020 Generals.

Good luck to the @Buccaneers and @Chiefs in tonight's #SuperBowl! pic.twitter.com/hkOsJRUoUp

This year should be the year of Blake Camper. He is hungry and humble.

“The goals that I have this year are to make an impact where ever I am fortunate enough to play,” Camper said. “I really look forward to playing the game and having an opportunity to learn.”