ARCA Lucas Oil 200 was a race for the ages 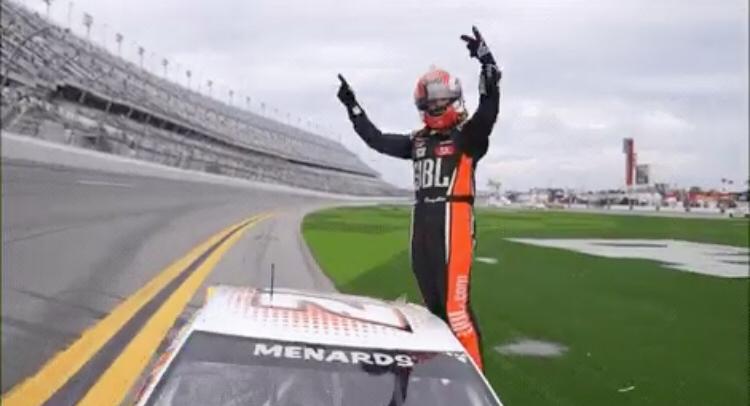 The Lucas Oil 200 for the ARCA Menards Series was a great race from the very beginning. Only three laps in, Brittney Zamora in his Drew Dollar and Gracie Trotter lead the pack. Ten laps into the race in was the first wreck which included, Thad Moffit, Jack Wood and Jack Bickle. Moffit and Wood were able to return during the caution from the turn one wreck.

From the beginning, Toni Breidinger (in the new No. 02 car) showed why she should be someone to watch. She started the day only two cars from last but by lap 10 at the caution, she had already moved up to 23rd. Con Nicolopolous also made a statement moving up seven spots.

After the first restart, Trotter would compete with her teammate Dollar for a few laps before overtaking him for the lead at lap 20. That was until lap 25 when it was overtaken by Derek Griffith. That lead would not last long as Trotter overtook it next lap.

.@gracietrotter11 to the lead at @DAYTONA

Ty Gibbs received a lot of talk throughout the race up to this point. He moved up three spots, from 16th to 13th, so not sure why he was receiving so much publicity aside from being in the Joe Gibbs Family. Plenty of other drivers to hype up to this point besides him. He had started 27 ARCA races and won eight with 19 top-10 finishes, so he is basically a Chase Elliott of the ARCA.

A big wreck on lap 29 took out Nick Sanchez No. 2, Derek Griffith No. 55, Scott Melton No. 69, Greg Van Alston #35, Gracie Trotter No. 25 (very minimal damage) and No. 15 of Drew Dollar. Melton at 59 is still into racing which is pretty awesome to see. Bret Holmes in his No. 23 car just made it through the wreck unscathed.

Lap 34 was a huge pitstop lap under caution with the modified pitstop rule. Around 80 percent of the field pitted. The caution would last until lap 40.

The No. 18 of Gibbs would move up to third and No. 17 Tanner Gray would lead up until the lap 43 competition pit stops. Corey Heim in the No. 20 would take the lead when leader Gray pitted. Toni Briedinger in her No. 02 would move up to the 13th spot. The coverage would even show her at this point even from moving up that far.

Slightly over halfway through, a lot could be seen. Gracie Trotter and Toni Breidinger are the two drivers to watch in this race. Trotter had to come back from the wreck and is up to the sixth position at this point in the race. Breidinger would be 10th at this point in the race, avoiding every single wreck and fighting for each position. Andrew Jankowiak, the 32-year-old rookie, would be eighth after he started 11th. Jankowiak put his entire life savings into his ride and overcame the tragedy of losing two members of his family in auto racing accidents. Corey Heim is another who moved up from the 22nd place start to first.

The race would commence with 32 laps remaining.

With 21 laps remaining, Gracie Trotter got into the back of Chuck Hiers in the No. 01. He went into the pits and Trotter’s truck went in the pits the following lap and took her out of contention after having a great day. Hiers would come back out as well but only for a lap until his car would start smoking.

With 12 laps remaining, only 18 cars remained on the lead lap. Drew Dollar had tape flapping off the front left side of his car. Only half a second would separate the top four with seven laps remaining.

Scott Reeves blows a tire and hits the wall

4 laps to go at @DAYTONA

The 18-year-old Heim would remain leading the pack with five to go. The caution flag would come out when rookie the No. 88 Scott Reeves hit the wall and spun thru the infield grass with water splashing everywhere from the rain earlier.

Overtime would happen to bring this race a winner.

Heim and Dollar would fight hard through the overtime segment but the Toyota of Heim would bring home the victory in the Lucas Oil 200 at Daytona.

Derrick Lancaster in the No. 29 would finish sixth. His second career top-10 in the ARCA. Lancaster would say how much he and his crew love the sport by saying his crew is all volunteers.

Gracie Trotter would end the day four laps down finishing 23rd after her scuffle late in the race. That one has to hurt after her strong run all race up until then.