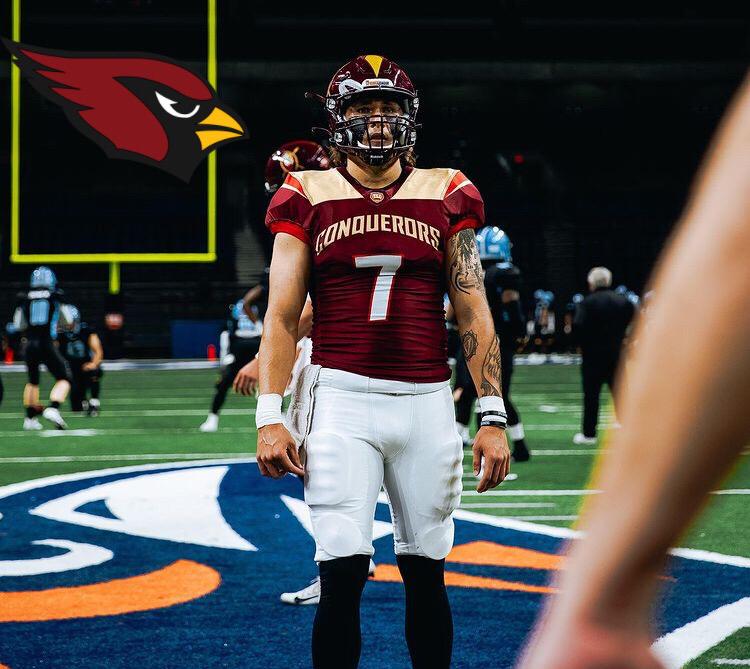 This morning, per The Spring League and Adam Schefter, former Conquerors quarterback Cole McDonald signed to the Arizona Cardinals. McDonald is the first player from this past season of The Spring League to sign with an NFL team.

McDonald really did not see any action as a Conqueror other than just one snap, which was a handoff. He was primarily the backup to quarterback Kevin Anderson after Tulane product Justin McMillan left the league following a fight with an Alphas coach.

McDonald started for two seasons at Hawaii (played six games as a sophomore). He passed for 8,032 yards, 70 touchdowns, 24 interceptions and a 146.8 passer rating. McDonald is a dual-threat quarterback. He rushed for 880 yards and 12 touchdowns on 251 attempts as a Rainbow Warrior.

In the 2020 NFL Draft, McDonald was drafted by the Tennessee Titans in the seventh round.

Arizona is a good fit for McDonald because he will be paired up with the Cardinals franchise quarterback Kyler Murray and both have similar skill sets. McDonald is five inches taller than Murray. At 6-foot-3, 215 pounds they both have speed and a shockingly big arm.

Obviously, the only real chance of us seeing The Spring League product in action would e the preseason, which looks to go as normal this year. McDonald would be competing for the backup role against CFL veteran Chris Streveler, who started the season finale for the Cardinals. They brought Streveler back on a futures deal.

All in all, this way a good move. McDonald is still young at just 22-years-old. He has a lot of football ahead of him and all that he needed is the right team. The Arizona Cardinals look like a great landing spot for the Rainbow Warrior great.