Mac Jones is the Most Complex QB Draft Prospect Ever 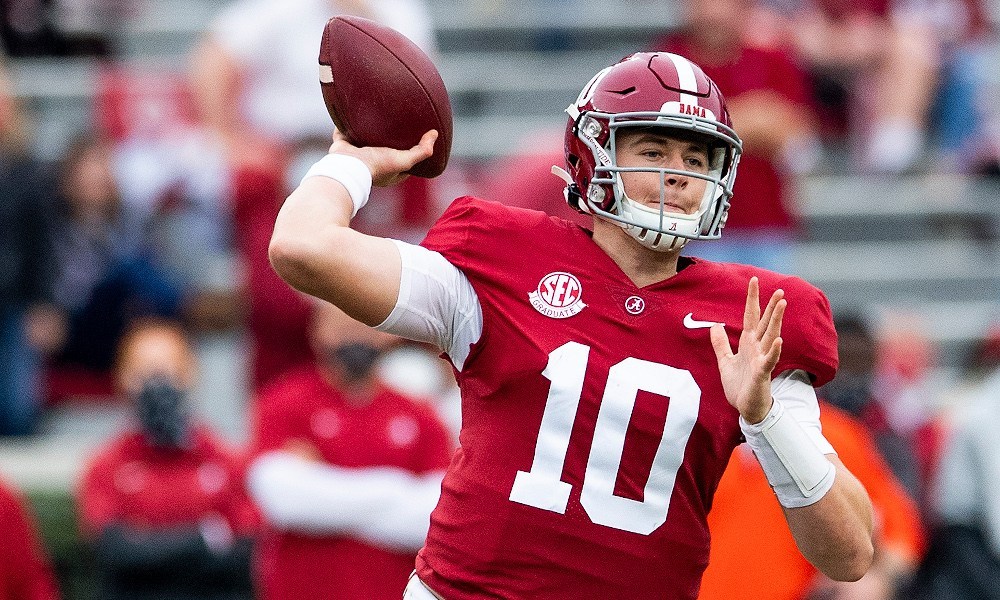 At the top of the world is Mac Jones. The Crimson Tide quarterback is set to make the move to the NFL after winning the National Championship with Alabama. The only thing is, no one knows how good he truly is. Jones is easily the most complex evaluation of the entire class for all the quarterbacks in the 2021 NFL Draft.

This past year in college football, Jones threw for 4,500 yards, 41 touchdowns and four interceptions. The guy was on fire for the entire year. This makes it back-to-back years where a quarterback has come out of nowhere to have this much success.

Discrediting his performance is also easy. Formerly a 3-star prospect, Jones nearly went to Kentucky. How many players captured Alabama’s national championship this year? The Heisman wideout DeVonta Smith. The best running back in the country Najee Harris. The speedster Jaylen Waddle. Jones also is helped by a terrific offensive line, who will most likely end up in the NFL.

When watching Jones play, it’s clear that he’s more talented than AJ McCarron, Jacob Coker, and Greg McElroy or any of the Bama quarterbacks of the Nick Saban era other than Tua. Although Mac Jones is an accurate football thrower, most of his weapons are running wide open.

With terrific timing, touch, and anticipation, Jones plays like he is a former 5-star – as shown by the excellent completion rating of 77 percent. The quarterback part of the game, he has done amazing with. Jones appears to have a better feel for the game and has great ball positioning more times than not. The worry about Jones’ game is he doesn’t have the ability to run well. Or at least hasn’t shown that he has the ability to run.

He isn’t the most athletic man in the world either. The sheer strength of Jones’ arm is far from the elite. In the NFL, people are talking about Tua Tagovailoa. Guess what? Jones isn’t as gifted as Tua. The pure skillset stuff you look for in a quarterback suggests that all is largely normal.

You have to be prepared to hand the quarterback anything he wants when you draft one in the first round. It’s not just Mac Jones that you draft it’s anyone. You better be able to hand him the bag. This is a judgment that could haunt you for many years. Are you ready to take Jones in the first round as well, in a draft featuring Trevor Lawrence, Justin Fields and Zach Wilson? Three of the best prospects ever.

I’m not saying, Mac Jones won’t be successful but you don’t want to end up with someone like Andy Dalton, who won’t win you a playoff game. Yes, Mac has potential but who will develop him? A desperate team that is in win-now mode or a team that won’t force him in a bad situation and will develop him for the years to come. With no combine, it’ll be tough to stand out in a draft with many good quarterbacks.