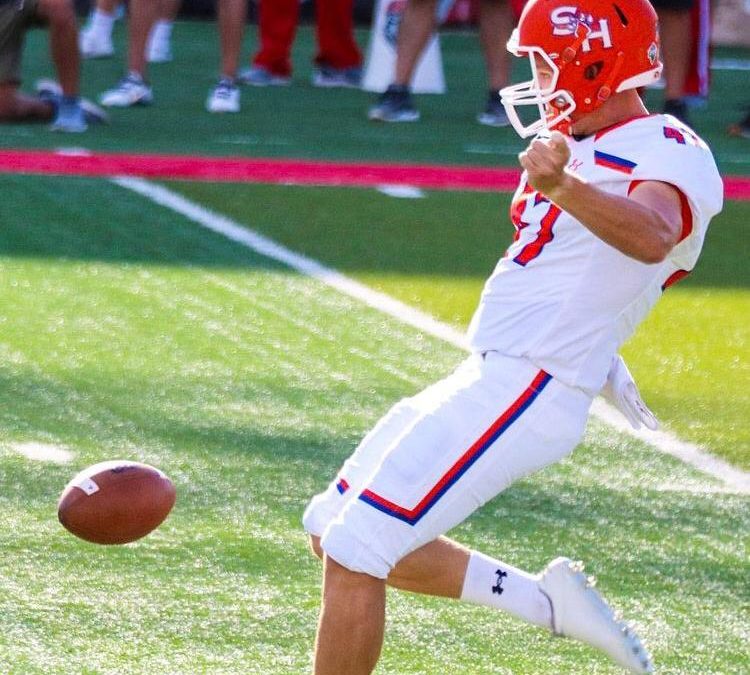 One of the most consistent punters in this year’s draft class has to be Matt McRobert from Sam Houston State. McRobert in his 2018 season for the Bearkats, played in four games as the Bearkats’ punter before injury cut his season short. He would set a new SHSU record for the longest punt when he smashed a 74-yard bomb against Central Arkansas. The Aussie born punter averaged 40.9 yards per punt on 19 punts for the year, and six of his 19 punts were pinned inside the opponent’s 20-yard line.

The home of the Bearkats, Bowers Stadium started out as a very special place for McRobert.

“My favorite stadium to play in is Bowers Stadium,” McRobert said. “There is no place like home. Especially when you have home fans cheering you on, it makes it great to play at home. We have been lucky at Sam Houston State. Bowers Stadium is a fortress if you will. We have had 21 and 23 home game winning streaks so it is not easy for the opposition to come in and play here. I am looking forward to the spring home games when we get to play at Bowers Stadium that is for sure.”

Very grateful and honored to get this recognition. Looking forward to the up coming season with @BearkatsFB. #EatEmUpKats 🐾😺https://t.co/EKjqrCtfvt pic.twitter.com/g5SyjtrJTn

McRobert averaged an SLC-best 44.3 yards per punt. He had 20 punts of 50-plus yards and did not have a punt blocked all year. His longest punt return against him was only 23 yards. McRobert ranked sixth in FCS in average yards per punt. He would rally an SHSU average of 41.9 yards per punt in net punting, which led the FCS after the regular season totaled five punts of 60-plus yards. He would have 29 punts downed inside the 20-yard line and 13 punts downed inside the 10-yard line.

I have never seen snow fall before and never thought I would see snow in Huntsville. There was nothing better than to go punt in the snow even with one ball bursting, it was worth it! Looking forward to playing in the Spring Football Season. @ProkickAus @JohnnyPKA @PatMcAfeeShow pic.twitter.com/o3QcG4GpF3

I was fortunate enough to receive a few end of season accolades which I am very grateful for. This was my first full season playing College Football and I’m looking forward to the 2020 season #EatEmUpKats pic.twitter.com/KbvcoYKs8h

“What a team should see in me is my ability to hit a different variety of punts depending on where the ball is on the field,” McRobert said. “Punting is a lot like golf, the further you are away from the end zone, the bigger the kick will be. For example, this is when you may drive the ball and try it that bit further in comparison to if the ball is at midfield and you need a pitching wedge to get it inside the 10-yard line. No two punts are the same, and being a punter you are always being kept on your toes on how you will kick the ball and what you want the end result to be. It is important as a punter to have a successful range of punts that you can successfully use depending on where you are on the field and the conditions that are present.”

As you can see from his accolades and booting punts in the snow and wind, he can clearly hit the big ball in the elements and under pressure, which is massive for a great punter. The best NFL punters can smack a 45-50 yard ball cleanly under pressure and McRobert can do just that for your team.

There are quite a few Aussie born punters in the NFL (or in the professionals in general) who are Australian like former New York Jet Lachlan Edwards and Michael Dickson from the Seattle Seahawks. McRobert doesn’t see himself as just another Aussie punter. He sees himself the way he should, as a player that is unique.

“I would say I am not like any player in the NFL,” McRobert shared. “Each Australian in the NFL is very unique and different to each other with their own styles of kicking. I think a thing that is cool about the Australians is we have been kicking all our life’s and it comes naturally to us and kick the way we do and that is why the success of Australian punters is growing at the college level because of ProKick Australia (Nathan Chapman and John Smith). That success is continuing in the NFL with more Australians getting their opportunity at the professional level.”

Punters always get discredited for just coming and booting the ball on fourth down. They really are the fourth down quarterback and having a great punter on your team like McRobert is truly a necessity.

“My ultimate football goal is to say when everything is said and done that I was a good teammate and team player,” McRobert stated. “Being a punter you aren’t going to be the standout player, but being able to be told or have the self-belief that in each game you did your part to help the team win, I take a lot of pride in that. Getting the individual acknowledgments are great, but I want to help the team win games and go win a conference and national championship!”

Playing half the world away from your family will definitely take its a toll, no doubt. But McRobert is making his family proud and acknowledges them any way that he can do so.

“My biggest inspiration is and always will be my parents,” McRobert said. “Being away from home is hard, especially that it is over a year since I have seen my family, but they continue to support and encourage me from Australia. My dad made many sacrifices for my sister Claire and I to have the best opportunities in life to succeed, which I am forever grateful for. During the time of growing up, I didn’t realize what he was doing to make sure Claire and I had the best opportunity at success and growth as young kids and teenagers. Looking back now, I am very blessed and so grateful as to what he did for me in helping me become who I am today. My mum would do anything for Claire and I growing up too. Being a stay at home mum, her and I developed a bond that is unbreakable. She helped with everything possible and was very unselfish which her time towards Claire and me. I am a very lucky man with the parents I have!”

In this upcoming year’s NFL Draft, McRobert is going to be a punter that you cannot miss on. He is one of the punters that I like to describe as having a ‘golf bag’ on the field. What that means is, he can hit the big ball, the hanger ball, punts that move all through the air and ones that he wants to be pinned perfectly. Another good trait with McRobert is that he a great size punter at 6-foot-2, 210 pounds.

“My best talent on the field is my passion to win,” McRobert said. “Every time I go punt brings a new opportunity to set our defense up for success. Field position wins games! It is important that I can be near-perfect every time I punt to help the team in any way I can. I take a lot of pride in my opportunities to help the team be successful.”

Make sure that you stay tuned into Matt McRobert’s spring season and he will show you why your squad needs him.