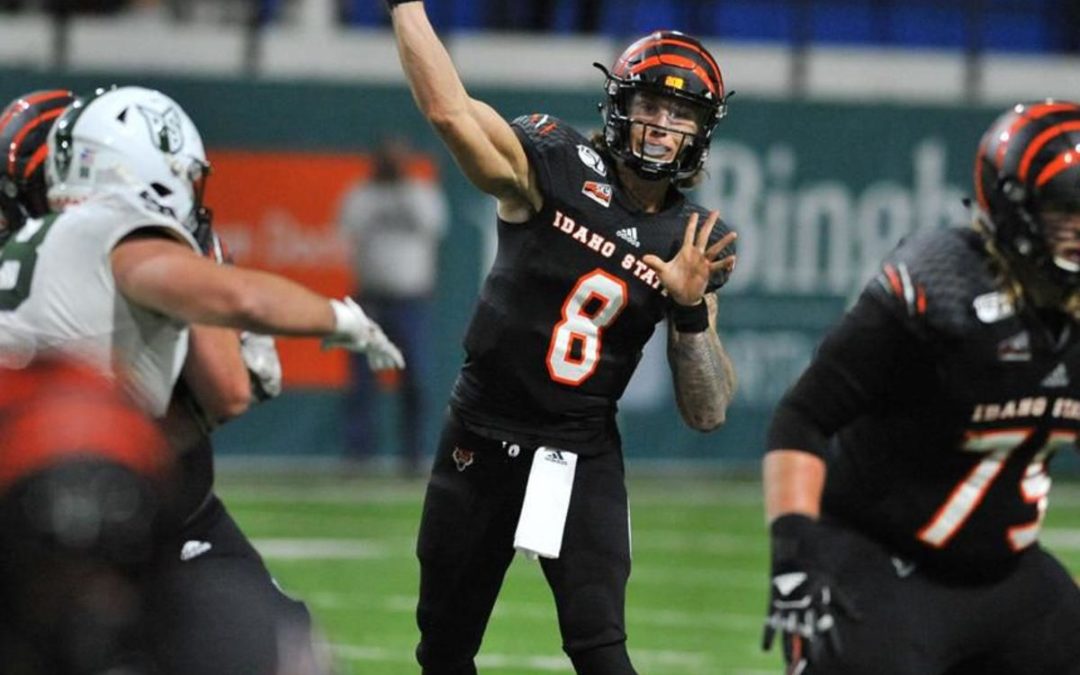 Matt Struck is a quarterback that your team can rely on to come up clutch and on short notice. He was the signal caller for Idaho State in the 2019 season. During his time as a Bengal, Struck appeared in 11 games, went 164 of 320 in the air for 2,334 yards, threw 20 touchdowns and 12 interceptions. He also recorded 57 rushes for 62 yards. Prior to Idaho State, Struck played at Riverside CC. This upcoming 2021 spring season the quarterback will be playing for Missouri State.

“Playing for different colleges has allowed me to adapt to new situations,” Struck shared. “While learning a new playbook is extremely challenging in itself, becoming a good teammate and leader as the new guy is just as hard if not more.”

“Excellence is not a destination; yet it is continuous daily improvement and the growth of ones self” Full Link in Bio &: https://t.co/QyKlDbE9nC pic.twitter.com/7ZkNBg1tzc

During his time at Idaho State, they were able to face bigger name teams from the PAC-12 and the MWC to get himself and the team more exposure.

“My favorite college stadium I’ve played in was probably the University of Utah, with BYU as an honorable mention,” Struck remembered.

Struck at 6-foot-3 is a good-sized quarterback with a massive arm. He certainly throws a big football like some of the bigger name NFL quarterbacks. He has an uncanny resemblance to Trevor Lawrence on the field with a mix of Joe Burrow.

“I feel like how I at least see myself, my most fair comparison would be Joe Burrow,” Struck stated. “He isn’t a true dual-threat but is more than athletic enough to make something happen. But mainly he has a very cerebral approach to each play, trying to attack the defense whichever way the play called intends to. He seems calm and collected when there are a million things going through his mind.”

Struck is staying ready for action. He focuses on his goals for reaching the NFL as well as his own personal goals.

“My ultimate goal of course, like a majority of others, is reaching the NFL,” Struck said. “Although at the end of the day, reaching my full potential as a player mentally and physically is my ultimate goal. That may or may not result in an NFL opportunity.”

He is always studying film and training to become the best player that he can be. Struck is one of the players with a crazy amount of talent.

“A team should look at my work ethic outside of team activities,” Struck said. “Extra time on the field, film room, whiteboard or even just rehab. Everything daily revolves around bettering myself as a quarterback.”

Being a talented quarterback is not a trait that is acquired over tonight. Struck is always on top of his craft to become the best.

“I think my best talent on the field is understanding what each offensive play is trying to accomplish and what component of the defense it is trying to attack,” Struck said.

Struck never gives up. He will definitely be a great locker room presence and a great team leader. He is always feeling inspired saying,  “My mom is for sure my biggest inspiration. She was a single mom who was of course always working. She instilled a lot of core values in me which I still use.”

Keep in mind that Matt Struck will have the spring season to gain more stats, film and exposure. Right now and after the season, he will be a quarterback that should be on your radar on draft day.