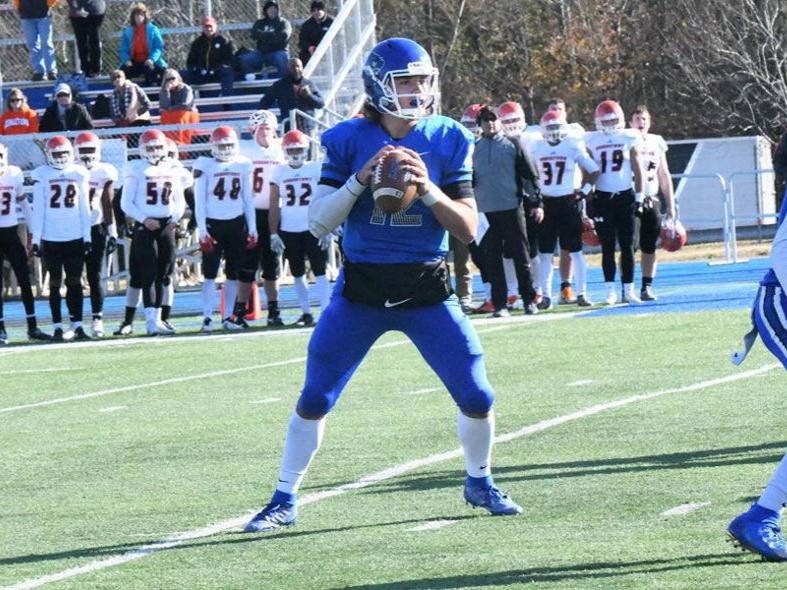 On the state about NAIA players being hungrier:

“I would say so,” Dukes shared. “Everyone has this depiction of NAIA that you can’t make it from this level and that just isn’t the case. There is talent at all levels and in my opinion much more here (NAIA) than some NCAA divisions. I want to prove people who passed up on me and says it’s not possible wrong and those that truly did their homework on me coming out of high school and believe in me right.”

Dukes lives up to what he says. He had a seven touchdown game against Warner College, which is crazy. He has an elite arm that will play at any level of professional football, but he can rush the ball well too! To his record, he was a two-year starter and in his first year at Lindsey Wilson, he passed the ball six times and completed all six passes.

“Lindsey Wilson Blue Raider Stadium, I absolutely love this place and the atmosphere our fans bring.  It has become my home away from home,” Dukes said on what his favorite stadium is.

His career college stats for passing are 395 for 650 for 5,445 yards (averaged 262 yards a game in 2020) for 54 touchdowns to only 13 interceptions. Thirty-five of those touchdowns were just in his 2020 season. He would win the Mid-South Conference Male Athlete of the Year award. Dukes also was a two-time MSC Offensive Player of the Year and two-time MSC All-Conference player.

On the ground, Dukes took the ball 252 times for 1,015 yards and 15 total touchdowns, Twelve of which were in his senior year. He is a true, dual-threat option at the quarterback position. Pretty awesome.

“Improvising by being able to keep plays alive while still looking downfield,” Dukes said. “I’m able to make plays with my feet and my arm, throwing the ball at any level of the field.”

Dukes is a player that you should trust to lead your team through thick and thin. He can take the ball when needed to slip out of pressure to make a big play or sling it down the field with accuracy.

“A team should see a true leader in me,” Dukes said. “I want what is best for the team at all times and I want to make those around me better. I lead by example and relentless work ethic and leave everything I have on the field each practice and game. I want a team to look at what happened when someone took a chance on me and see the results that it came with.”

Dukes credits Russell Wilson as a quarterback that he likes to watch and learn from.

“We have very similar play style and leadership on and off the field,” Dukes said. “ I believe that we are similar in how we go about our business.”

He most certainly has all the capabilities to be the next Russell Wilson and have the great NFL playing time that Wilson is having. Dukes has big goals on his radar and with a similar size to Wilson. Dukes comes in at 6-foot-1, 205 pounds.

“My ultimate goal is to be in the Hall of Fame.” Dukes said. “I know my path is different than most, but I have full confidence in myself and my work ethic to accomplish that. Either as a quarterback, running back, wide receiver, punter, etc. I’m a football player at heart and any opportunity I get I will take.”

To close out our talk, Dukes was asked about someone who motivates him the best or his biggest inspiration.

“My biggest inspiration is my parents,” Dukes said. “They have taught me everything about working for what you want and setting the highest standards for myself. I have never expected anything to be handed to me. I was raised on work ethic and seeing them work how they have to earn their success has driven me to do the same.”

Cameron Dukes will be a player that you do not want to sleep on in the 2021 NFL Draft. Just because he comes from a small school does not mean he doesn’t have the skill set of an NFL quarterback.