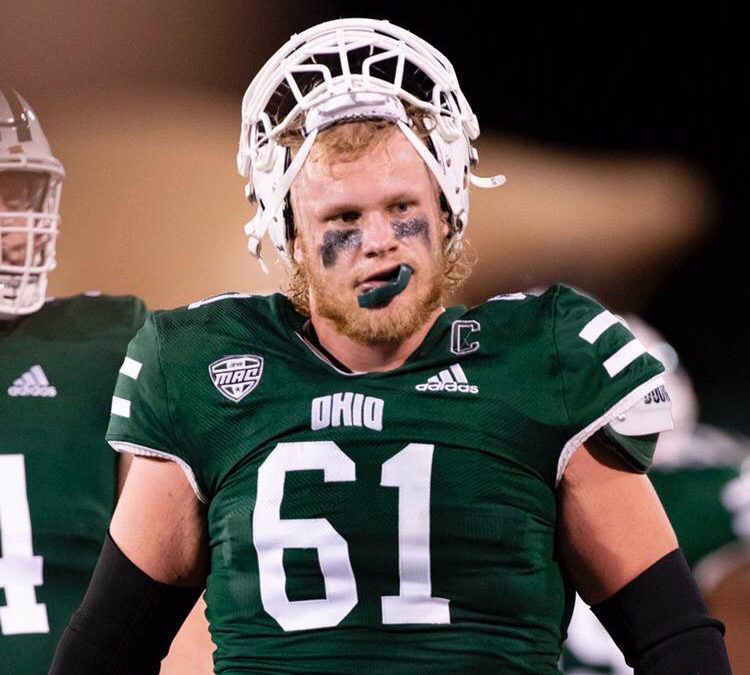 The left guard and center out of Ohio University has seen his fair share of MACtion and played well all throughout his time as a Bobcat. Kitrell played in eight games in 2019; all at left guard. He started nine games, including the first seven in 2018, and earned both Academic All-MAC and MAC Distinguished Scholar Athlete. During his true freshman year in 2017, he played in 10 games including the season-opener. During the 2020 season, Kitrell saw action in three games.

A college football memory that sticks out to him is playing at Cincinnati. “It was a rowdy, exciting atmosphere and was a great game,” Kitrell said.

Kitrell said that his favorite offensive lineman to watch in the NFL is Jason Kelce. They both are big and strong lineman who can get it down.

“My biggest talent on the field is my strength,” Kitrell said. “Once I lock up with a defender I feel very solid in controlling them and locking them down on run plays, driving them backwards.”

Kitrell comes in at 6-foot-3, 302 pounds. A big, strong interior offensive lineman is key to have. The best offensive linemen are worth just as much as your star quarterback, if not more because they are the ones making him look good.

“My ultimate football goal is to be the best player that I am capable of becoming,” Kitrell shared. “My dream has always been to play in the NFL.”

Staying locked in and focused on the NFL goals surely has been hard for all players, but especially the linemen who do not get the respect that the other guys do. For someone who inspires him to never give up.

“My father Barry Kitrell,” Kitrell said. “He is a strong man of faith that has pushed me to be the best I can be.”

As a final pitch to NFL teams, Kitrell says, “They should look for a great communicator and leader on the O-line. Also, a guy who has a high motor, will finish each play and will bury guys when given the opportunity.”