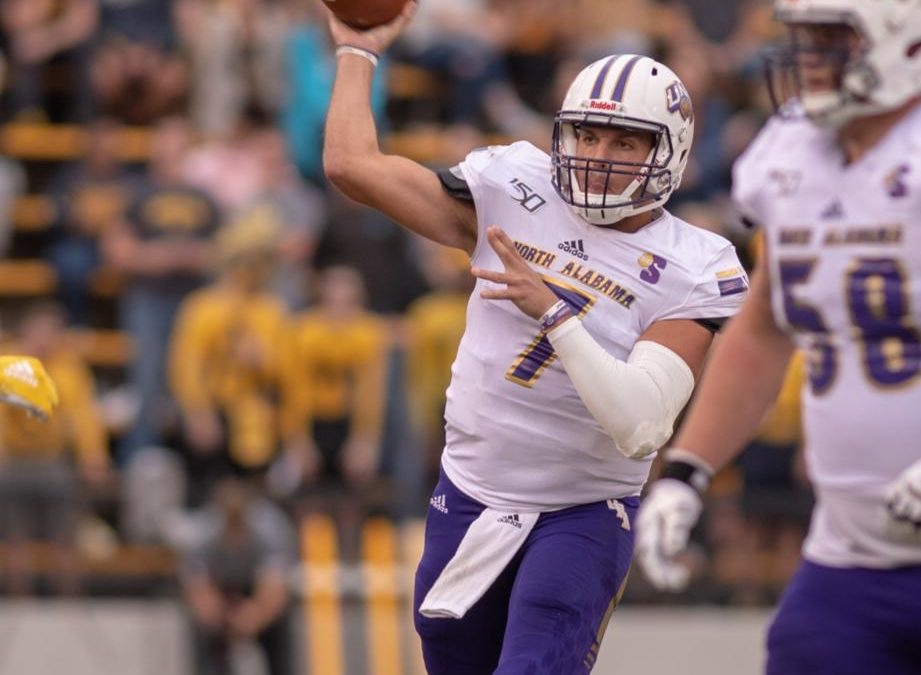 A quarterback with a huge arm and super versatile. Those words are just a few that can describe the North Alabama Lions quarterback prospect Blake Dever. He is 6-foot-3, 257 pounds, which is pretty comparable to Ben Roethlisberger. A big, strong quarterback is usually always a safe bet for a longevity in the league. If you watched The Spring League, he has an uncanny comparison in play style to the Generals quarterback and league MVP Bryan Scott.

Going off of the big arm that I talked about, Dever said, “Best talent on the field would be arm strength and accuracy.”

In Dever’s redshirt senior year at North Alabama, he played in five games. He completed 35 of 54 passes for 429 yards, a touchdown and an interception over five different games. One of which was a start. During his first game and first drive which was against Kansas State, he rallied his team down the field 65 yards for a touchdown.

Prior to his time with the Lions, he played at Iowa Central Community College. Dever completed 158 of 254 passes for 1,893 yards and 17 touchdowns and threw for 189.3 yards per game.

Before Iowa CCC, he played for Savannah State. Dever saw action in eight games as a true freshman. He completed 44 of 98 passing attempts for 506 yards with a pair of touchdowns and three interceptions.

Dever knows how to turn it on under the bright lights. For example, back against Kansas State. But his all-time favorite game was “BYU” Dever shared.

Dever has played all through adversity and continues to shine and have his name on the board. He always stays motivated and inspired.

“Biggest inspiration is my family,” Dever said. “They motivate me to be great on and off the field.”

Blake Dever should be on your team’s draft board during this year’s draft. He still has his spring season as well so the quarterback is not done yet. Dever said that his goal is to “play at the next level after college.”

If you are not sold yet, make sure to watch Dever ball in the spring and know that he can lead your team to victory. – no matter the circumstance.

“A team should look at me as a leader and a winner,” Dever stated. “My style of play is getting the ball in the hands of the best guys on the field.”