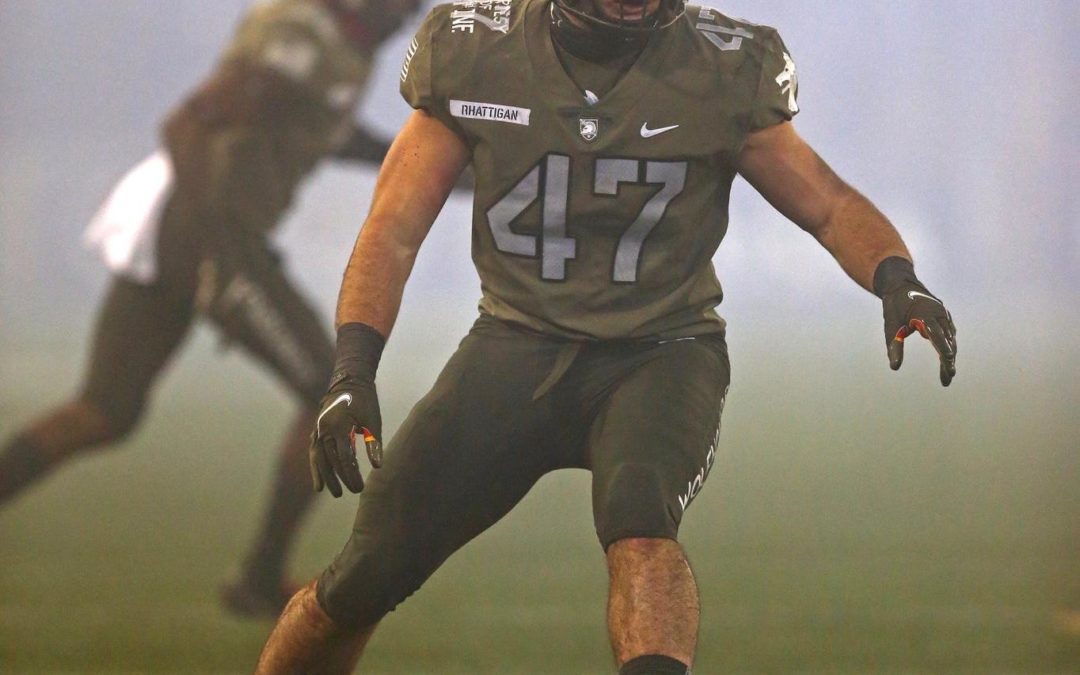 Jon Rhattigan had himself a year this year for the Black Knights at Army. In 11 games he tallied 78 tackles, which included an 11 tackle game against UTSA. The linebacker also had multiple games with six, seven or eight tackles. His lowest tackle game of the year was four tackles. Rhatigan garnered second team All-American honors by USA Today.

He also had two interceptions which totaled 93 yards and one of which was a pick-six, two fumble recoveries, and 1.5 sacks with 9.5 tackles for loss. Rhattigan was clearly all over the field making his presence know for West Point. He also helped lead Army to be the #1 defense in the entire country.

We allowed 276 yards per game in our 12 games this season. #GoArmy pic.twitter.com/zQZe4HSsn2

His college football journey even led him to one of the most prestigious stadiums in the world of football, which would be one of his favorite stadiums he played at. “The Big House at Michigan and of course, Michie Stadium,” Rhattigan shared.

Any NFL team that gives him a chance in this year’s NFL Draft will be getting a unique player that can get it done on defense every single play. Rhattigan said that his “hustle and playmaking ability” are his best traits. He clearly backs that up on the field and the stat sheet doesn’t lie.

Looking at the future, some of his goals are to “lead an NFL defense as a starting linebacker” Rhattigan shared. He led the Black Knights to nine victories this past year, and this was his first year as a true starter for every game at linebacker. Just think about how much more of a beast he can be with more playtime under his belt. Rhattigan is one of the players where the sky is really not even the limit, tons of uncapped potential to be developed.

Rhattigan said his favorite NFL player to watch is Cole Holcomb of the Washington Football Team. They are pretty much identical in size, both are 6-foot-1 and 240 pounds. That is a great size for an elite NFL linebacker. Watching Holcomb play this past year for the Football Team, it is easy to pick up how underrated he is in the same sense that Rhattigan is.

That question branched off to his best ability on the field and he said “vision and play making” which clearly speaks for itself. Wherever the football is, Rhattigan is. He also says that “both of his older brothers” are who inspire him the most to be the best that he can be.

Jon Rhattigan should be a player that is on your board on draft day. He has what it takes to play in the NFL. All that he needs is for a team to believe in him. He ranks number 55 on the Pro Football Focus board of their top 101 players, which is a big accomplishment.