Zach Mettenberger: Where is he now? 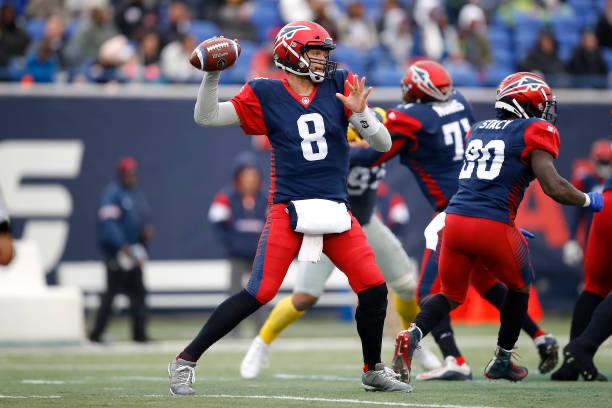 The former Tennessee Titans quarterback has not had his name in the NFL realm since 2016 but has been with the Memphis Express of the Alliance of American Football back in 2019 and The Spring League the past two years. Mettenberger sat behind The Spring League MVP quarterback Bryan Scott during the Generals championship season last month.

Mettenberger was drafted back in 2014 in the sixth round out of LSU, his draft stock fell tremendously due to a knee injury during his senior year. Between the 2014 and 2015 seasons with the Titans, he played in 14 games, started 10, and had an 0-10 record. The record is not pretty but neither were the Titans, also Mettenberger had some “maturity issues” that made him not very likable to some people.

In his first AAF action yesterday, QB Zach Mettenberger started the second half and proceeded to throw for 120 yards on 9/12 passing and two TDs. We think it's time for the Mett Show to get the starting nod! #TSLinAAFpic.twitter.com/3XVAXS27T1

Nowadays, if Mettenberger played in the league it would be the norm to post on Snapchat and such before the game. JuJu Smith-Schuster dances on logos before games and people eat that up. Not me, but hey, if that’s what you like. The worst thing that Mettenberger did was post a Snapchat that said “Ima starting NFL QB, get some” that is all cool by me.

In Metteneberger’s 14 games, he passed for 2,347 yards, completed 60.2 percent of his passes along with 12 touchdowns and 14 interceptions. Not pretty but, not the worst. After Tennessee, he would sit on the bench in Pittsburgh for the Steelers for a season and be a free agent for two years until the AAF came around.

He was invited to attend the AAF draft. About 10 of 32 drafted quarterbacks were invited. He would fall to the last round and be the last invited quarterback selected. Mettenberger stayed level headed and said he was ready to compete. Mettenberger would even have his own series on the Express’ social media called “The Mett Show” where he would talk with other teammates.

For the Express, he would throw three touchdowns and just one interception, completing 66.7 percent of his passes for 475 yards.

The Mett Show would also rush for three yards, not impressive but resulted into two rushing touchdowns. He would suffer an injury and be replaced by future XFL Seattle Dragons quarterback Brandon Silvers.

Express on a roll, Zach Mettenberger keeps it himself for 6️⃣! #SDvsMEM pic.twitter.com/jw3SUB4krr

Crazy that he fell out that way. He played in The Spring League in the winter of 2020 but those stats are not easy to find, but that was his last football action. The former Titan was even passed up in the 2020 XFL Draft. It was baffling that no team gives him a chance.

He is 6-foot-5, 235 pounds with a cannon for an arm. That is an NFL prototype right there. Hopefully someone gives Zach Mettenberger one more chance to prove himself.