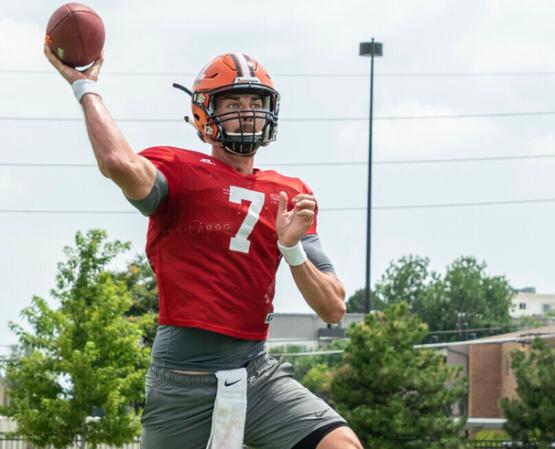 Former quarterback of The Spring League’s Conquerors and Blues Connor Kaegi has signed with the Jacksonville Sharks, defending champions of the NAL, Friday Night.

“It’s such a blessing,” Kaegi said. “ I grew up and went to high school in Jacksonville, Florida before moving my junior year so to have a chance to go back and play in my hometown is so cool.”

Connor Kaegi (@connorkegs) quarterback of @TheSpringLeague Conquerors and Blues has signed with the Jacksonville Sharks of the NAL.
Pic via his IG @/kaegsauce. pic.twitter.com/s7Hy2F2MbK

Kaegi made the announcement via his Instagram page. This is a huge step for him in his professional football journey. During Kaegi’s time in The Spring League, he did not have a chance to see any action in-game but he came to the league just before it was suspended with the COVID rules.

“The Spring League provided me with opportunities, connections and relationships with coaches that will continue to further my career playing football,” Kaegi said.

The Sharks play in one of the top two arena leagues that are still active. The NAL or National Arena League is compiled of seven active teams all on the east coast. Jacksonville has been active in the league since its inaugural year in 2017 and they’ve already won two titles, one in 2019 and the other in 2017.

“Really I’m just excited to play football again,” Kaegi shared. “ I didn’t get much of an opportunity this whole last year of 2020 so I’m just looking forward to playing again. I just want to get a chance to prove myself and win.”

The current roster of the Sharks shows Mike Fafaul as the lone quarterback, aside from Kaegi. Fafaul attended UCLA and backed up Tommy Grady in 2018 for the Albany Empire. If you are unfamiliar with arena football, Grady is essentially the equivalent of a Tom Brady or Aaron Rodgers of arena ball. The Sharks quarterback room will be bursting will talent. No doubt.