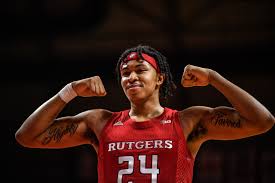 This year, Harper was a possible second-round pick, but through his first seven games the Rutgers star is playing outstanding; averaging 23.4 points and 7.1 rebounds per game. Harper is shooting 56 percent from the field and 50 percent from beyond the arc on seven attempts per game.

Harper scored a season-high 30 points against Fairleigh Dickinson and an upset win over Illinois. Harper scored 28 points on 9-15 shooting and 4-7 behind the arc. Also, the shooting guard grabbed nine rebounds as Rutgers went on to pick up a 91-88 victory.

Harper is off to a great start this season, and his draft stock is creeping up into the first round. If he continues to score and develop at a high clip, he could worthy of a lottery pick. Harper has improved every year in college and looks to be getting even better.

Rutgers is currently ranked 14th in the country and has some big games coming up. Saturday the Scarlet Knights take on No. 10 Iowa, then on to No. 5 ranked Michigan State and next Saturday against No. 25 Ohio State. Harper missed Rutgers last game against Purdue due to a hurt ankle. Hopefully, he will be back Saturday when Rutgers needs him.