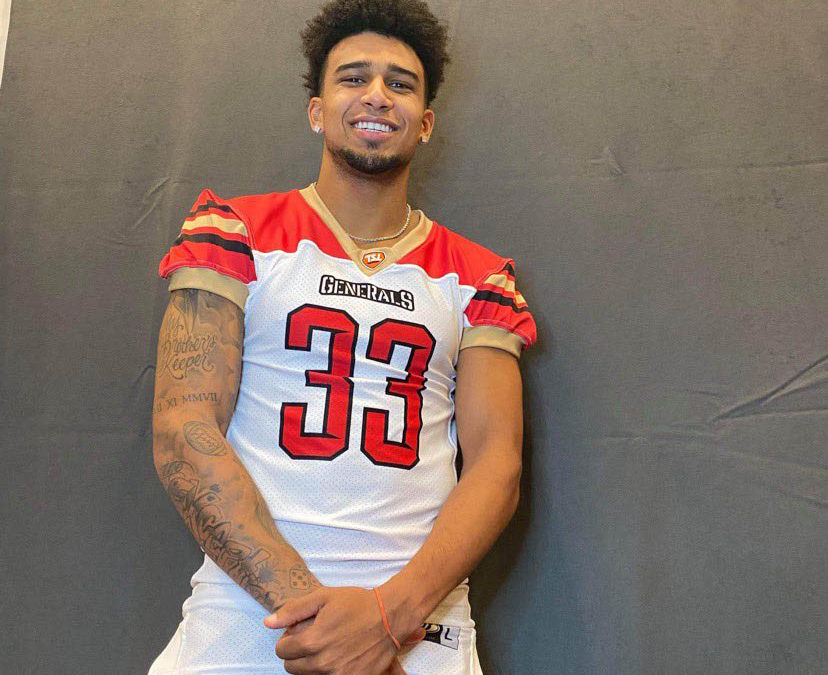 Amani Dennis, a defensive back from the Generals of The Spring League, is continuing to stay ready and look for his professional opportunity.

@TheSpringLeague thank you for the opportunity! LIKE, SHARE, RETWEET, TAG YOUR FAV TEAMS! I don't care what you do but any support means alot to me! I'm fighting the good fight!! I'm RIGHT THERE and won't stop till I get there! I appreciate the support! @NFL @CFL @XFL2022 pic.twitter.com/qW5BvGSJ3X

Dennis actually played Divison III football at Carthage College prior to joining the Generals. Coming from Division III to having a chance to play professionally is a huge step for any player.

“People who come from D3 understand that opportunity is very rare. You either need to be connected or you had to make a way for yourself. For me, I look at my story and being undersized my whole life and then on top of it going D3, I’ve had the odds stacked against me the whole time. But never did I complain or anything,” Dennis shared, “I fought for everything I’ve accomplished thus far and don’t plan on stopping until I’m back in the league and staying in the league. Coming from D3, there’s a lot more to prove and in the most humble way possible, I’m here to say that I’m here for it all. The adversity, the ups and downs, I’m here for it and will take it all head-on. Finally, I’ll let God handle the rest!”

Last week, Dennis and the Generals took home the championship in a 37-14 triumph over the Aviators. “It felt good! I’ve never won a championship in football, so for my first one to be in professional football on national television was a great feeling. And to do it next to the guys I did felt even better,” Dennis said. ”We had a genuine connection with each other, and playing with those guys was fun every moment of it.“

That then led to Dennis’ favorite moment in his time as a General along with bringing home the championship. “My favorite moment as a General was the cameras all in our face while we were on the turf as a group celebrating the championship,” Dennis remembered,” People had cigars. Everyone kissed the trophy. So moments like that are definitely the highlight of the league for me.”

In this business ANY reps are good reps. Unfortunately the season being cut short we lost the opportunity to play more. But for the 2 games I got in I'm grateful for those reps. And to be able to play against NFL,CFL,XFL competition makes it even more better. @TheSpringLeague pic.twitter.com/UgTJo6rvtk

The Generals put together an impressive undefeated season. The Spring League is full of talented players, but Dennis made each play count no matter who his matchup was. “I don’t have a specific player that was the “toughest” to face,“ Dennis stated, “I just fought to win every rep and controlled what I could. It didn’t matter who lined up against me.”

Since The Spring League season culminated, Dennis hasn’t stopped grinding and is staying ready for the professional opportunity. “Now that TSL is over. I’ll back in the Chicago land area training at WIN performance every day. They are the best trainers in the state and train dozens of guys in the NFL. I have been training with them since I was younger and they are like family to me. So I’ll be home with them working every day to perfect my craft and God willing be able to sign a contract moving forward,” Dennis said.