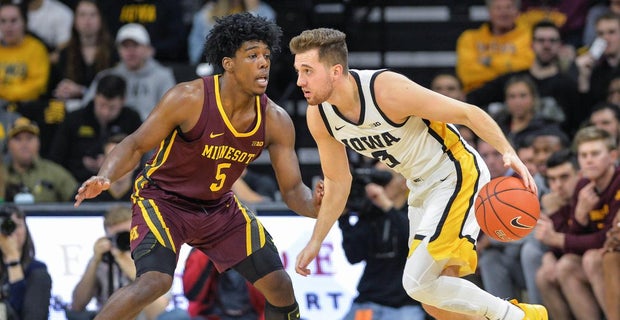 Iowa started conference play with a whimper as opposed to the bang most people were expecting. I am not ready to say the sky is falling yet, but there are some questions carrying over from the Gonzaga game that need to be addressed. Overall, defense has always been a weakness and, lately, poor shooting has plagued the Hawkeyes. These are problems that Player of the Year frontrunner, Luka Garza, can not fix by himself.

Ranked fourth in the nation going into conference play, Iowa opened with an underwhelming 70-55 win over unranked Purdue. Luka Garza led the way with 22 points, 9 rebounds, and an assist in a lackluster scoring performance from this dangerous Iowa squad. Guard Joe Weiskamp was the only other player to reach double digits with 17 points. The defense was the story of this game, holding Purdue to only 55 points and forcing 14 turnovers. It was a solid bounce back game for the defense following the loss at Gonzaga, but the scoring was definitely lacking. At one point, the Hawkeyes went five minutes without a basket. Coach McCaffery brushed off concerns post game saying “I knew we would score eventually.” While I admire the attitude, the answer avoids the fact that a drought like that will result in a loss against almost any Top 25 team. Iowa is riding an explosive offense to wins and when that offense doesn’t score, Iowa won’t win. That being said, Iowa did get the win to open conference play 1-0.

Next up, Iowa faced the Golden Gophers in Minnesota and this game was frustrating to watch. Iowa came out struggling in the first half, but refused to let Minnesota pull away despite Garza only scoring 5 points. In the second half, Iowa came out hot, but could not put the game away. Minnesota tied the game up with less than ten seconds left in regulation and Iowa proceeded to shit the bed in overtime and lose the game. Iowa had several opportunities in the second half to shut the door on Minnesota and just could not execute. Marcus Carr was on fire, dropping 30 points on a Hawkeye defense that looked vulnerable at best. The defense only forced 7 turnovers and were caught out of position all night. The only bright spot on the defensive end was rebounding. Iowa out-rebounded Minnesota 55-38 and did not allow Minnesota multiple shots per possession. Another good takeaway from this game is that the offense showed up. Garza led the way with 32 points after a slow first half, CJ Fredrik contributed a career high 27 points and Weiskamp turned in 14 points on another solid night. The problem was shooting down the stretch. Iowa ended up with 37.2% FG shooting and only 71.1% from the line. They had several opportunities from the free throw line and from the field to close out the game in the final two minutes and couldn’t get it done. Iowa allowed the Gophers to hang around and eventually force overtime. Once overtime started, Iowa could not buy a bucket. Normally reliable Bohannon missed a couple threes, Weiskamp and Toussaint both missed free throws, and Iowa fell short 102-95.

Looking forward, Iowa is still a favorite to win the Big Ten. Everyone knew that the Big 10 schedule was going to be brutal and Iowa was going to lose a game that they shouldn’t on paper. Now, the question is “Will it just be one?” I think it could be. They are the most efficient scoring offense in the nation and Garza is number one in scoring. That being said, they need to figure out how to play defense and close out games if they want to make a deep run in March. Go Hawks!