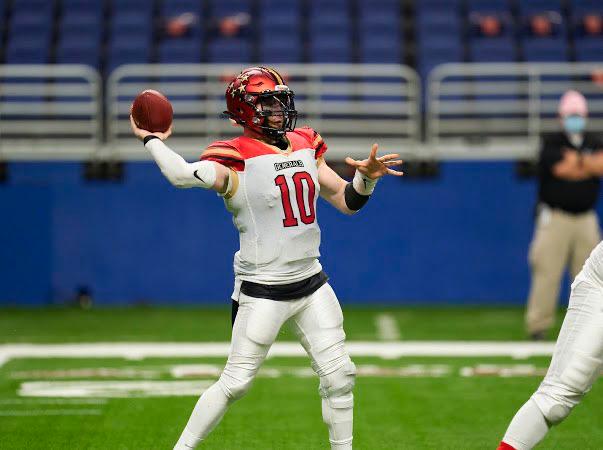 MVP of The Spring League and quarterback of the Generals, Bryan Scott had an absolute baller season which concluded with 13 total touchdowns and 1,102 passing yards.

“I think it was a great year for my team and our offensive unit,” Scott said. “I’m proud of the stats of course but I’m more proud of the way our team was able to score 33 points per game and to get wins on top of that. Also, the thing I think was a great team statistic was we only turned the ball over once as a team and that’s just good winning football.”

Branching off of the great year and taking home the MVP honors, Scott says that it was a great honor and his team helped him be able to showcase himself quite a lot. The talent may be within you, but having the team to help show your talent is massive.

“Anybody who wins MVP knows that it takes a team effort,” Scott said. “Football is the greatest team sport in the world. I feel truly blessed to have had the coaches and teammates I did. The thing I pride myself on is just getting the very best out of my teammates and helping them be successful which in turn makes us win games. I’m very honored to receive the MVP award as well as winning the championship but it takes a team. “

Obviously, Scott and the Generals had a crazy good season in The Spring League and proved why he deserves to be on an NFL roster.  As he stays ready for his next opportunity, Scott prides himself on getting better every single day.

“Right now I’m just focused on being better every day as well as just enjoying what we just accomplished as a team,” Scott said. “Going undefeated and winning the championship is special in professional football. Something we will always remember.”

The Spring League was a clinic of Scott and his Generals. He had tons of great experience and had the chance to get even better. Since day one of being a General, Scott had tons of great times. When asked what:

“That’s a tough question,” Scott remembered. “The easy answer of course is the after winning the title… but truly I enjoyed every second with this team from Day 1 of camp to the last walkthrough. We had a special group of guys and it was an honor to play with them as well as get to know them off the field. I will forever cherish those memories made with my Generals teammates.”

There are already about 10 players from this year’s Spring League that have had tryouts or signed with NFL teams. This is not a push around league, the talent is there and these guys are there for another NFL opportunity. Scott is hungrier than ever to prove himself.

Scott couldn’t pick a single toughest player to play against because so many of the players were high caliber and gave credit where it was due.

“There were a lot of special players in TSL 2020 this year, so that’s tough to say,” Scott said. “I hope a lot of these guys get signed because they truly deserve it. Most importantly I’m hoping my teammates do because I know the effort and time they put in for our team to win the championship. I got a lot of love and respect for everybody in this league chasing their dream and betting on themself.”

Bryan Scott really does deserve an NFL chance. JT Barrett of the Alphas already received one and he had a fraction of the year Scott had. Honestly, Barrett wasn’t even the second best quarterback in The Spring League.