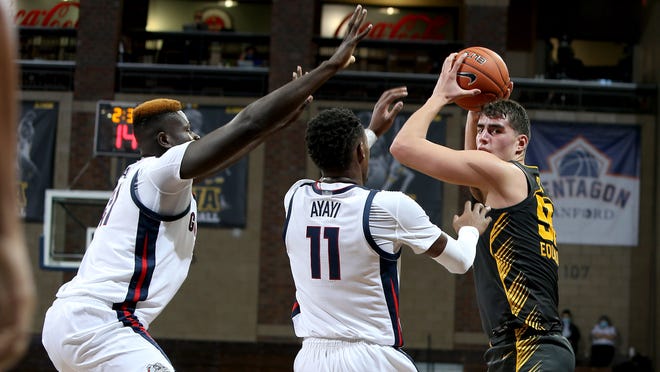 Saturday’s game was disappointing. Not just for Iowa fans, but for everyone that tuned in to watch what should have been a great matchup. It was not. Gonzaga established an early lead and never let Iowa back into the game. Final score was 99 – 88, but Gonzaga led by as many as 20 in the second half. It was, overall, a very bad showing for an Iowa team with National Title hopes.

Gonzaga came out and played Gonzaga basketball. They moved the ball well, transitioned well and manufactured open shots. Guard Jalen Suggs led the way with 27 points and four other Bulldogs ended with double digits. I’m not going to spend much time on Gonzaga, other than to congratulate them on a well played game and a good win.

Iowa had some issues that were painfully evident this game. I’m not going to go full meltdown like some and claim the season is over, but some things need to be fixed. Iowa did a great job of feeding Luka Garza and making Gonzaga focus on him. The problem was the perimeter shooters did not take advantage of open shots. Iowa was only 4 of 22 from three-point range. This is abysmal. Iowa cannot expect to play Top-25 opponents and win while only shooting 18 percent from three-point range. The fact that they only lost by 11 points is a testament to how good Garza is. He did his best to lead them to victory on the offensive end, but in the end he is only one man. Garza led the way with 30 points and Joe Weiskamp contributed 20, but it was not enough against the high scoring Bulldogs. The other glaring mistake I noticed throughout the game was rebounding.

Gonzaga out rebounded Iowa 49 to 37. This included 16 offensive boards for the Bulldogs. Iowa can not expect to win games if they allow second and third shots on multiple possessions. The Iowa defense was better than expected and forced 18 turnovers. It was incredibly frustrating to watch Iowa force bad or contested shots and then allow Gonzaga to get an offensive rebound and extend the possession. This was a big part of Gonzaga first building a lead, and then maintaining it.

Looking forward, Iowa faces a tough conference schedule and will need to improve accuracy from three-point range and play better defense if they hope to make a deep tournament run. I hope this game serves as a wake up call and motivates Iowa to play their way back into a top-5 ranking by season’s end. Let’s Go Hawks!!!