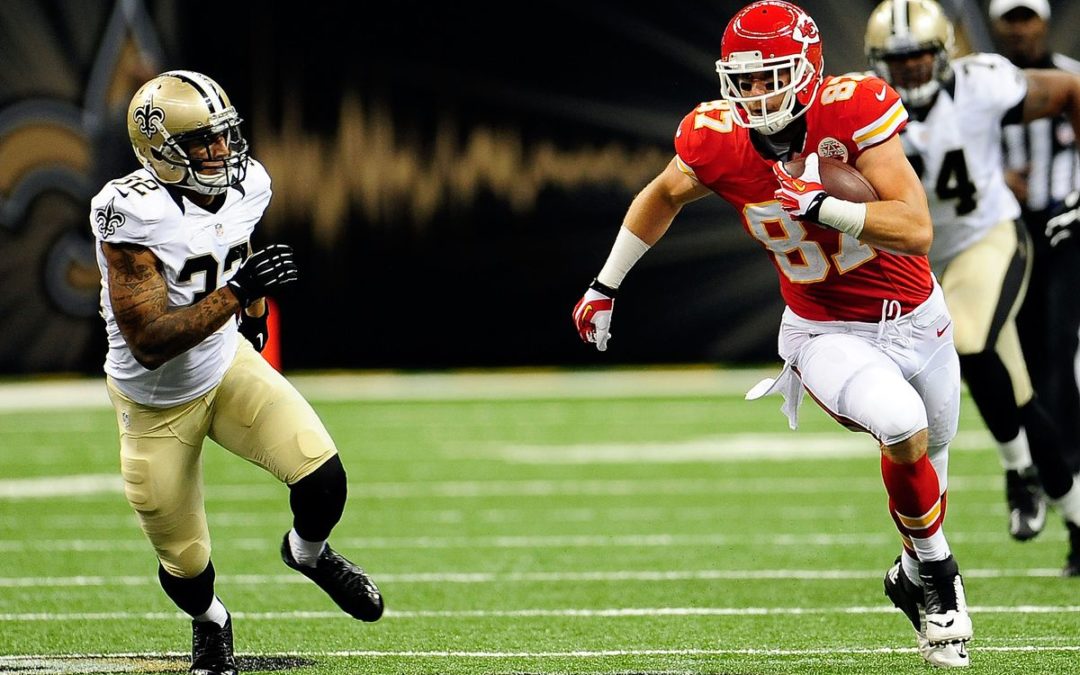 Welcome back to Week 15 coverage of the hottest games on the slate. Last week came and went and I took the L, going 1-2 after chickening out and taking an over/under instead of a line. This week no backing away and I will try to find an angle for you to take advantage of. Hopefully, we can get a sweep and back on the winning track. There are some intriguing matchups this week so let’s get into it.

AFC South matchup and a big game for the Colts as they battle Tennessee for division supremacy. The Colts come into this one fresh off a stunning performance by their offense, which has continued to get better and the defense, which continues to play well. The Texans are almost polar opposites. Injuries and lots of change has hampered DeShaun Watson and this Houston offense. The Texans get back Brandin Cooks and David Johnson, which should help, but these Texans have been abysmal on defense as well. Jonathon Taylor should be in line for another huge game. The Colts and this defense will probably struggle a little bit here and Watson and company should be at least be able to put some stats on the board as they did a couple of weeks back. It will not be enough, however, and I fully expect the Colts to roll in this one. The Colts this year are 9-4 ATS (against the spread) and the Texans are 4-9 ATS and 2-6 after a loss. This almost seems too easy which makes it a square play but I am riding with it. 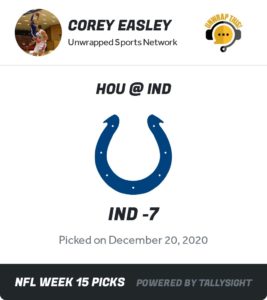 Let’s be honest no one wants to bet on the Vikings and the Bears but both teams still have playoff aspirations so here we are. The Vikings have struggled mightily and played uber inefficiently last week against Tampa Bay. The Bears crushed in their matchup and Mitch Trubisky looks like he has a little life left in Chicago. Dalvin Cook has been absolutely sensational, however he was improperly used and ran into the ground last week but still finished with good numbers. Unfortunately for the Vikings, they played super slow and dug themselves into a hole that they could not get out of. The Bears defense has been very good again. I expect them to cause all kinds of havoc to Kirk Cousins and this Vikings offense. Unfortunately, for the Bears, after a win this year they are 2-3 against the spread. I am taking Mike Zimmer to make something happen. Trubisky is good for at least one turnover. Both teams will rely on the run to move the ball. It will come down to turnovers. I think the Vikings will take care of the ball a little better in this one and be far more efficient with pace and actually making some kicks. 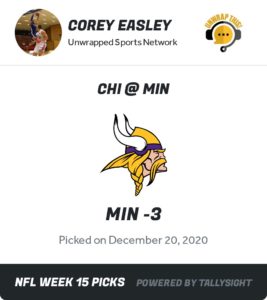 Patrick Mahomes and the Chiefs take their talents to the Big Easy and will take on Drew Brees, recently back from 11 cracked ribs and a collapsed lung. The Saints are licking their wounds after losing in surprising fashion vs the Philadelphia Eagles. Unfortunately for the Saints, they will be without No. 1 wide receiver in Michael Thomas, who was put on IR with an ankle injury. The Chiefs won again last week despite Mahomes throwing three interceptions in last week’s contest. Despite the win last week, KC failed to cover the spread and are now 6-7 ATS on the year. You wouldn’t expect that from a team that has played so well but that is where we are. The Saints will keep it short and simple on offense in this one and I am not sure if they can come up with enough explosive plays to keep them in this one. The Saints defense at this point seems a bit hit and miss so far this year. They will have to play one of their best games to pull off the upset here. I like the Chiefs to do everything they normally do on offense and Mahomes to give the Saints all they can handle. 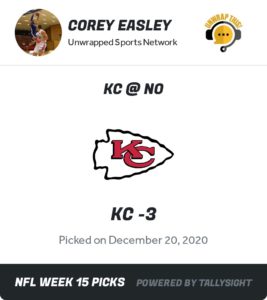