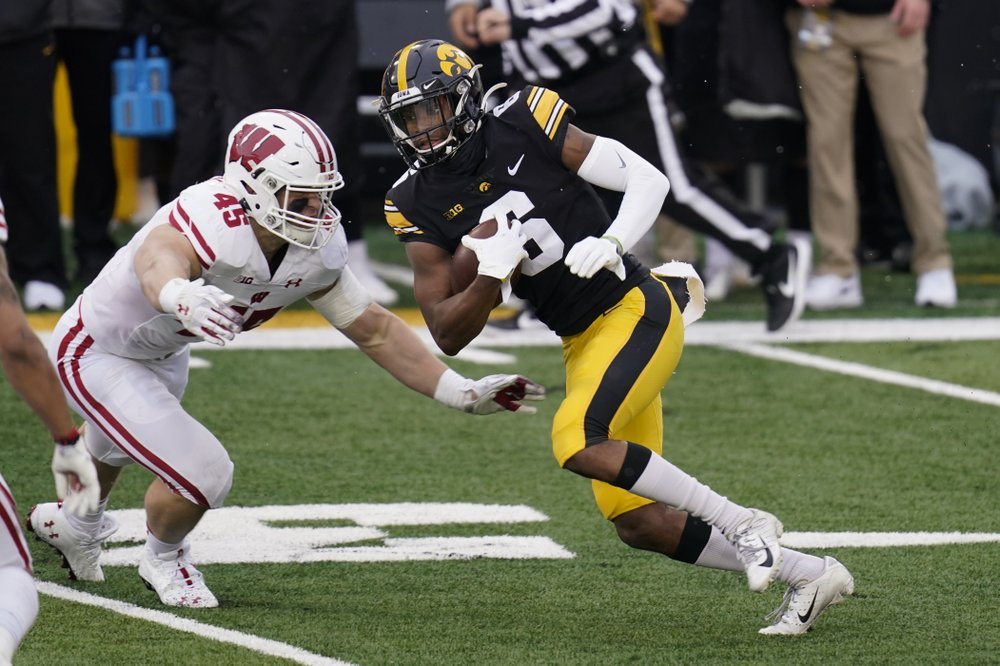 The Iowa Hawkeyes ended the regular season with a statement a 28-7 win over Wisconsin in Kinnick Stadium. The Hawkeye defense stymied Wisconsin all day and the offense did enough when it mattered to come away with another win.

The first half was an old school Big Ten defensive battle with only six points scored. All six points came from All-American kicker Keith Duncan as he connected on field goals from 30 and 45 yards out. Despite the score, the second half was largely a defensive battle, too. Wisconsin never gave up but Iowa’s “bend don’t break” defense never let them back in the game. Spencer Petras had two touchdown passes to Ihmir Smith-Marsette and Tyler Goodson put the icing on the cake with an 80-yard touchdown run in the fourth to put the game out of reach.

The offense, despite the lack of points in the first half, looked the best it had all year. Going into halftime, I felt like Iowa had this game won. Watching the first half offense, it felt like Iowa was only a play or two from breaking the game wide open and they showed that in the second half. Spencer Petras was an efficient 14 of 25 for 221 yards and two touchdowns. He still struggled with accuracy at times and still has room for improvement, but was able to do enough to win the game. Petras also benefited from one interception being voided by a pass interference penalty and one being dropped by the Wisconsin defense. The run game was also not great, but good enough. Tyler Goodson led the way with 106 yards on 11 carries and Mekhi Sargent added 51 yards on 13 carries. Ihmir Smith-Marsette had a career day at receiver totaling 140 yards and two touchdowns on seven receptions. Overall, the offense was good enough to get the win behind a strong defensive performance.

The defense showed up to play against Wisconsin. Chauncey Gholston (9 tackles, 1 sack) and Nick Nieman (8 tackles) led the way on an Iowa squad that came up with big stops when it mattered. The biggest was an interception in the end zone by Jack Campbell that stopped Wisconsin from making it a one score game in the fourth quarter. Wisconsin was never able to move the ball racking up only 56 rushing yards and a paltry 3-yard per play average overall. This was a typical performance from the Hawkeye defense this year. Nothing too flashy, just quietly getting the job done.

Looking back on the season, it is almost impossible to avoid wondering what could have been. The Iowa team that won the last six games is not the same as the team that lost the first two games. Coach Kirk Ferentz made references, without naming specific players, after Iowa started 0-2 that early practice time was limited due to COVID-19 protocols and the team was rusty. This leads any fan to wonder, what if? That being said, it is what it is, and being 6-2 after an 0-2 start is a great way to wrap up the regular season. There are several things that need to be improved going forward and several bright spots that bode well for the future. After post season play I will release a more in depth article looking towards next season. For now, I will just say the future looks bright.

One last note. As I was writing this article, it has been announced that a struggling Michigan team will be traveling to Iowa City to face the surging Hawkeyes next week. This will give Iowa a good chance to finish 7-2 on the season and improve their bowl chances. More to come on that game later this week. Let’s Go HAWKS!!!!