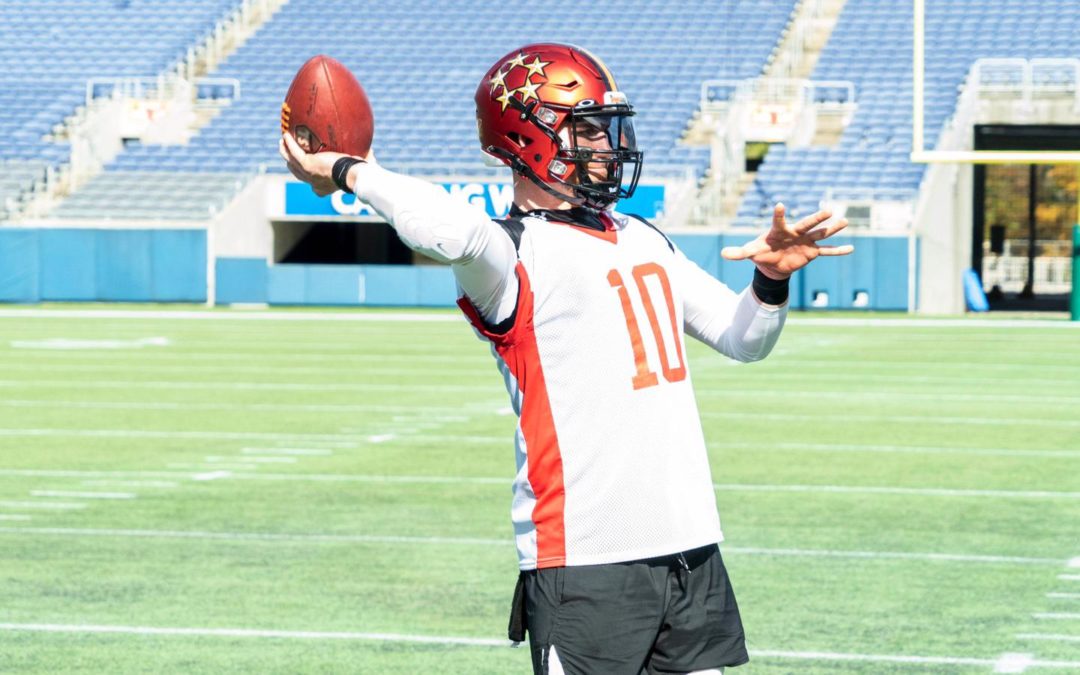 The Generals quarterback Bryan Scott has been putting up some obscene numbers this year in The Spring League.

Tuesday’s @TheSpringLeague championship will be a great one!! @BryanScottQb will be the player to watch! #Generals. pic.twitter.com/GExPerDoM3

In just three games, Scott has completed 67 of his 101 passes and thrown for 838 yards and eight touchdowns to just one interception.

Two of those games he went over 300 yards in the air. One saw him go for 314 yards and four touchdowns against the Aviators. The other he rallied against the Conquerors on opening night throwing for 304 yards and two touchdowns.

Scott and his Generals will be in Orlando to take on the Aviators, who will be presumably lead by McLeod Bethel-Thompson for The Spring League championship.

Scott only needs 262 yards and two touchdowns to etch his name into history once more in The Spring League. His lowest game this year was against the Jousters when he totaled 220 yards passing and one touchdown in a game they still came out on top.

Will Bryan Scott reach the 1000-yard mark and the double-digit mark on touchdowns? The short answer, it would be amazing and we will have to watch and see.

The long answer, Scott has shown that he can come into each game and ball out to prove why he deserves to be with an NFL squad. He is better than a majority of NFL backup quarterbacks and indubitably better than all practice squad quarterbacks.

There should be a lot more confidence in Bryan Scott than there should be with current NFL backup or practice quarterbacks like Nathan Peterman or Devlin Hodges just to name two.

Look for Scott to come in and show why he deserves to be in the NFL. The man can sling the football and put it anywhere he wants it on a dime.

What to watch and where to watch

The official rosters have not dropped yet for either the Generals or the Aviators so we will just assume everyone comes back. Players had until Sunday morning to report or let teams know because the players all needed to pass a COVID-19 test upon arrival and have their results in time for the game.

The game will be televised nationally on FS1 like the rest of the games, which will be huge but the time slot was moved from 10 p.m. EST to 7 p.m. EST. The 10 p.m. slot just makes sense. It allows a later game, which seems to bring in a better audience than a 7 p.m. game.