The CFP and why the committee is in trouble 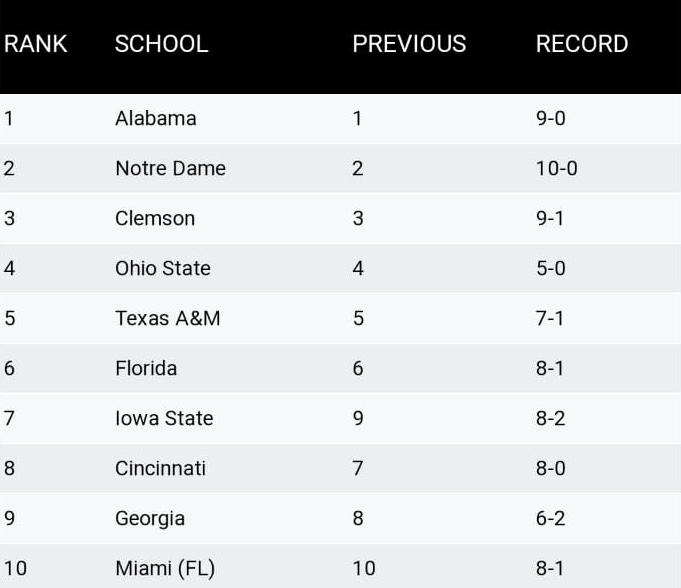 The college football regular season is coming to a close and the playoff picture is ridiculously obvious and a complete mess all at the same time. COVID-19 has changed the entire landscape of this season and all eyes are on the College Football Playoff committee as they try to navigate these unprecedented times. They dodged a huge bullet when Kevin Warren decided that fair competition and player safety did not matter and changed the rules to allow Ohio State to compete in the Big Ten Championship (keep your eyes open for an article on that mess). That still leaves several scenarios that the committee does not want to deal with.

The first scenario is the easiest by far and four things need to happen:

In this scenario, Notre Dame, Alabama, Ohio State and Iowa State make the playoff. There will be some complaining about the Group of Five being left out, but Iowa State’s six game win streak to close out the year will trump Cincinnati’s undefeated record. Iowa State will also jump Florida, Georgia and Clemson by virtue of winning the conference championship. The other outside option in this scenario is Cincinnati, who gets the fourth seed ahead of Iowa State. I don’t see the committee putting Cincinnati ahead of Iowa State if they both win, but it is a possibility.

Second possible scenario is also an easy decision for the committee. The only change from above is that Oklahoma beats Iowa State. This would put Notre Dame, Alabama, Ohio State and Cincinnati in the playoff. Again, fairly straightforward, and does not involve any significant movement other than Cincinnati jumping Iowa State by virtue of having a conference championship. You could make the argument that Oklahoma should be ahead of Cincinnati, but the committee doesn’t think so now and if they both win Oklahoma gets left out. The outside option of this scenario is that Tulsa beats Cincinnati and Oklahoma or Texas A&M sneaks in.

Now, it gets difficult for the committee. This is honestly the most likely outcome – in my opinion:

This is nightmare fuel for the committee. If Florida wins, they are in. So, you have Notre Dame, Florida and Ohio State in. That means Alabama, Clemson, Cincinnati, Iowa State and Texas A&M looking for that fourth spot. Alabama has been the best team in the country this year, but can you put a one-loss Alabama ahead of undefeated Cincinnati? Ahead of Big 12 champion Iowa State? This is the most challenging scenario by far. I don’t like it, but in this situation the  committee will most likely have Alabama, Florida, Notre Dame and Ohio State as the top-4.

This isn’t the nightmare fuel for the committee that an Alabama loss is, but it’s still intriguing. The Big Ten changed the rules to allow Ohio State to play because they wanted a playoff spot. I don’t think it’s absurd to think that the committee made assurances that they considered Ohio State a playoff team before Kevin Warren made that decision. If Ohio State is a playoff team and Northwestern beats them, then Northwestern is a playoff team. However, Northwestern would be 6-1 in this scenario. Does a 9-0 Cincinnati conference champion team rank ahead of Northwestern? Does a 7-2 Iowa State team? Does an 8-2 Clemson team?  As far as rankings go, is a Big Ten championship enough for No. 14 Northwestern to jump ahead of No. 5 Texas A&M? I don’t think so. If Ohio State loses, they are out. Alabama, Notre Dame and Iowa State are in. Cincinnati or Texas A&M sneaks in at the fourth seed.

This is all still very much up in the air as I write this. Ohio State could find an opponent to play before the championship game to boost their record. Games could be cancelled. It’s very hard to say exactly how things will turn out, but these are my guesses as it stands right now. Unfortunately, I don’t see Cincinnati or Texas A&M as having a real chance to get in the playoffs despite really good seasons. I also left the Pac-12 out of the discussion because their only chance died when Oregon State beat Oregon. Any way it plays out, I don’t envy the position the committee will be in and the decisions they will have to make. It will be a fun postseason to watch!!!