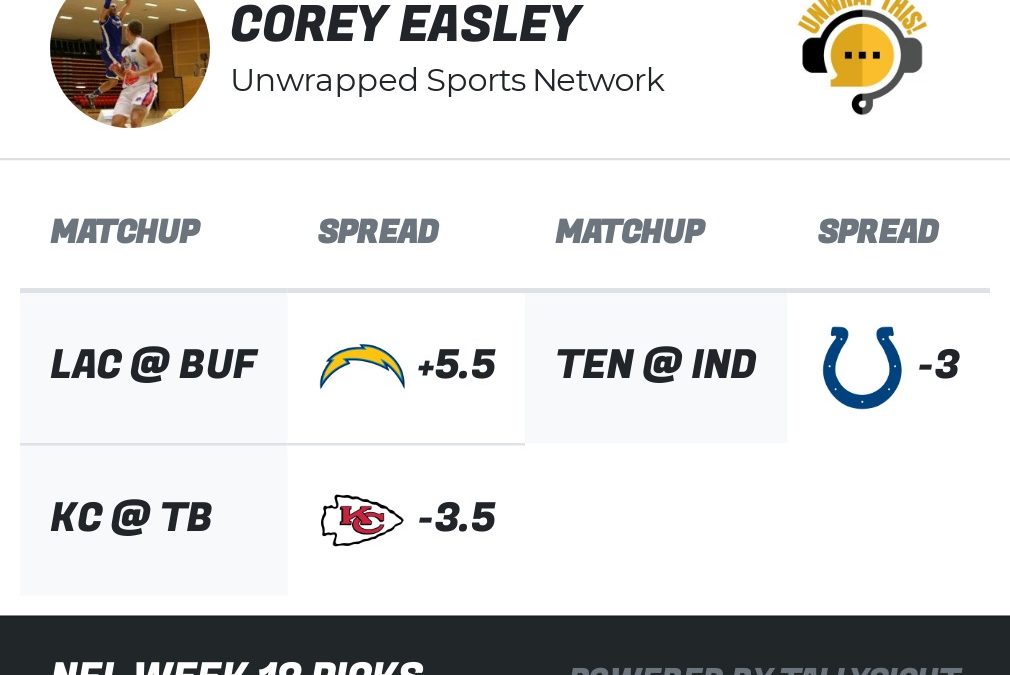 I hope everyone had a great Thanksgiving. We need to rely on those around us in these uncertain times. Last week I went 1-2 with what felt like a bad beat in the Chiefs game. All we can do is dust ourselves off and get back at it again this week. COVID has been a growing concern as the NFL reached out to teams again this week to ramp up protocols. The Ravens have been hit hard and as of right now and their game will be postponed until Tuesday. Hopefully, that game is played as it is a great headliner to the week. Let’s get into some other great games in Week 12.

This AFC South divisional matchup should be a great game. These teams saw each other recently and it was Special Teams that crushed the Titans’ dreams of beating the Colts. Phillip Rivers has been hot the past few weeks and it is easy to see why as they have played the Titans, Lions, Ravens, Bengals and Packers the last five weeks. Out of those, you could consider the Ravens a good defensive team. That being said the Colts are rolling at exactly the right time and will be confident after their win against one of the NFC favorites in the Packers. The Titans are feeling good about themselves after Derrick Henry took the soul of the Ravens on that overtime scamper. The Titans would like to rely on the run, however the Colts defense is one of the best in the league – even though we had our reservations about their defense a few weeks ago due to schedule. I no longer have them. The Titans will find it difficult against the Colts once again. The Colts offense will not have that problem and I expect the Colts to take care of business and sweep the Titans this season.

One play is all it takes to change the perspective of a team coming in. That is exactly what happened to the Bills two weeks ago as they went down on a Hail Mary to the Arizona Cardinals. They have had a bye week to get over it and now one of the best young quarterbacks comes to town in Justin Herbert. The Chargers are the king of one-score losses this year and I expect this one to not be much different. The Bills defense has not been great this year and can be taken advantage of. I expect both offenses to move the ball as the Bills and Josh Allen have been putting up points all season long. The Chargers are getting a little healthier on defense with Joey Bosa coming back last week and they will need him to keep Allen in the pocket. I fully expect this game to turn into a shootout and see these two quarterbacks sling it around. It may come down to a turnover battle. If Austin Ekeler plays it gives this Chargers offense an extra dimension. Look for the Chargers to be up late but find a way to lose. I like the 5.5 points but this game has a teaser leg all over it.

I tried to avoid the Bucs, as they have made this column for the third week in a row, but the Ravens/Steelers game is still up in the air. This game has all the makings of a headliner. Tom Brady vs Patrick Mahomes should be a great matchup on paper. As we have seen all season long, pressure on Brady is a game-changer and if you can generate some pass rush against the Bucs you have a decent shot at winning the game. Bruce Arians have been critical of Brady all year and I fully expect the Bucs to bounce back in this one. That being said, this Chiefs offense is no joke and firing on all cylinders. This Bucs secondary hasn’t looked too good in recent weeks either and I could see the Chiefs fully taking advantage of them in this game. It will be interesting to see Andy Reid’s approach to this game as far as run/pass splits go. The total in this game is set at 56 and I can see why. Start all your fantasy players in this one as I expect some yardage to be dropped in this game. Ultimately, I think the Bucs come up just short as Mahomes leads the Chiefs on a late, game-clinching drive to put the game away.