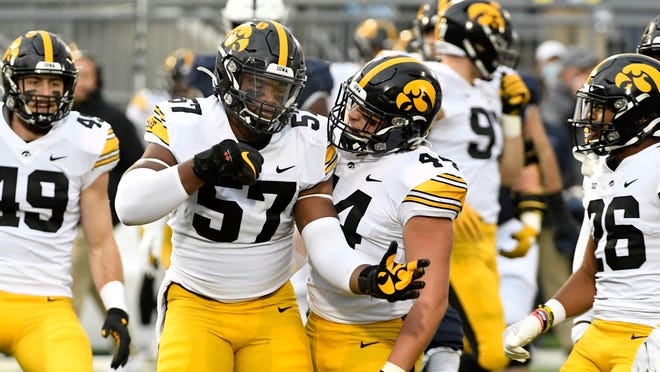 Iowa came away with a 26-21 win over Nebraska but that is not the score I expected to see today. Nebraska played better than they are, Iowa played worse than they are, and, in the end, the Iowa defense stepped up like they have all year and won the game. I am not going to split hairs, this game was bad for Iowa. It was definitely closer than it should have been and exposed some problems with Iowa.

First, the offense. Nebraska focused on stopping the run and was largely successful, especially in the first half. To their credit, Iowa refused to give up on the run game and Tyler Goodson did break 100 yards on the ground. The big difference was that Nebraska consistently brought more guys than there were blockers and held Iowa to a 2.9 YPC average. This stat is indicative of the Iowa running backs having to break tackles behind the line of scrimmage and fight for every yard. The run focused defense of Nebraska forced Spencer Petras to throw the ball more often, and usually in high pressure situations. Petras has thrived the last three weeks by making good decisions and an offensive game plan that took the pressure off him. Nebraska did a very good job of forcing Petras into high pressure situations and his inexperience and lack of accuracy showed. Petras ended the game 18 of 30 for 193 yards with one touchdown and one interception. He was lucky to get out of this game with only one pick and Iowa only put up 26 points against a Nebraska defense that has not been good this year. The one bright spot was kicker Keith Duncan turning in another stellar performance making 4 of 5 field goals and a perfect 2 of 2 on extra points.

Now, the defense. Iowa’s defense appeared to have trouble adjusting as Nebraska switched between Luke McCaffery and Adrian Martinez at quarterback throughout the game. Martinez went 18 of 20 for 174 yards and McCaffery averaged 8.4 YPC. These numbers show how Nebraska was able to use each quarterback’s strengths to exploit the Iowa defense. There were bright spots on the defense. Iowa recovered two fumbles and forced five punts. Daviyon Nixon totaled eight tackles, three for loss, and a sack. Nick Nieman had 12 tackles. Chauncey Gholston and Zach VanValkenberg played solidly on the defensive line and combined to force and recover the fumble that ended the game. That being said, the defense needs to play better if they hope to win against Wisconsin and go bowling.

Looking forward, Iowa has several things to work on in practice this week and needs to improve from top to bottom. I still think they have an opportunity to finish 6-2, but Petras will have to take a big step forward if that is going to happen. I will give the defense a pass this week because they have been carrying this team all year and they did enough to win the game.

Last, I want to address the Scott Frost/Kirk Ferentz clapping discussion. Per Coach Kirk, the referees approached him during the game and said Coach Frost had complained that players clapping and being loud on the sidelines was distracting his center. In his postgame, a normally tight lipped Coach Kirk did some rare venting saying, “We should just go home right now. What are we talking about? It’s football, right? It’s football. Should I be changing my pants? Different shirt? What are we talking about?” Ferentz said. Coach Kirk is right. Scott Frost trying to blame the fact that his center hiked the ball three feet over the quarterback’s head on noise from the Iowa sideline is ridiculous. Even it was true, if your center can’t perform in a virtually empty stadium how is he going to perform when 80,000 people are screaming their throats raw? It was just a ridiculous statement from a sore loser looking for excuses instead of fixing problems.

Hopefully, the Hawks will learn from this experience and continue to improve as the season moves towards the end. GO HAWKS!!!