Iowa looks to beat up on struggling Huskers 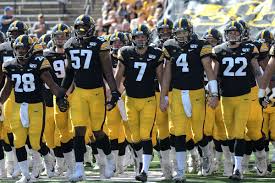 Iowa will face off against the Nebraska Huskers on Friday in what has historically been a close game. It won’t be this year. The traditional Black Friday rivalry is not much of a rivalry this year. Iowa is 3-2 and looking to run the table. Nebraska is 1-3 and looking at a real possibility of not winning another game this year. This is going to be a fairly short article because there isn’t much to say about this game.

First, Nebraska. The Huskers had high hopes when they hired Scott Frost and he has underwhelmed at best. So far, Nebraska has losses to Ohio State, Northwestern and Illinois. The sole win of the year came against Penn State at home and they got lucky. Penn State had every opportunity to go home with the win and couldn’t finish the game. The Huskers attempted to lose that game in every possible way in the second half and Penn State just wouldn’t let them. Nebraska struggled against good Ohio State and Northwestern squads, but also looked terrible against an average Illinois team. The Huskers just can not seem to play a complete game this year.

Now the game. Expect Iowa’s defense to feast on Friday. Husker quarterback Luke McCaffery currently leads the team in both passing and rushing yards and has only thrown one touchdown against five interceptions. Sound familiar? Iowa showed last week what they can do to a dual threat, turnover prone quarterback and I don’t expect this week to be any different. The Hawkeye’s front-seven will keep McCaffery uncomfortable all game and the Hawks will look to get an interception for the 13th straight game.

On offense, the Hawkeye offensive line will dominate and wear down the Husker front allowing Tyler Goodson and Mehki Sargent to lead the way on the ground. This will keep the pressure off Petras and allow him to make high percentage throws.

Overall, the blueprint is simple and easily executed for Iowa to roll to their fourth straight win. Final score: 42-7 Hawkeyes.