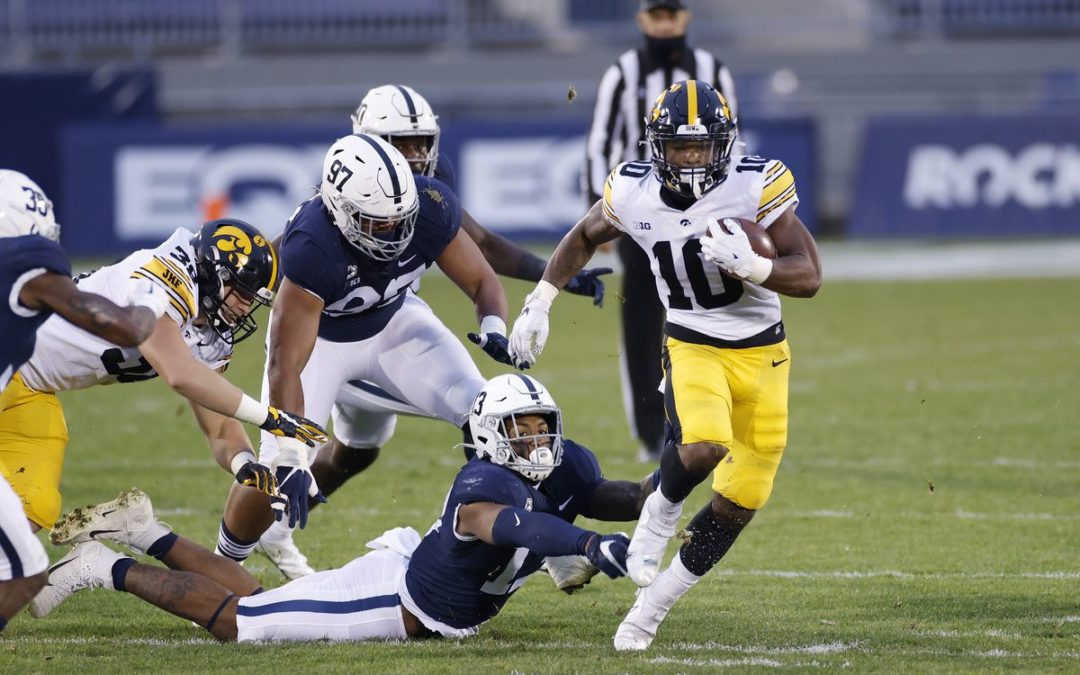 Iowa went into Happy Valley to face a Penn State team that had more questions than answers. Who will be the starting QB? How do we solve the turnover problem? How do we fix our slow starts? Iowa left Happy Valley with a decisive victory leaving Penn State with no answers. The Penn State offense could not figure out the Hawkeye defense and Iowa quietly won by 20 points.

Iowa opened up the scoring with a Keith Duncan field goal to go up 3-0. Penn State answered right back with a 14 play, 75 yard drive capped with a Keyvone Lee 6-yard TD run. Iowa’s defense proceeded to stymie Penn State the rest of the half, while Iowa added a score from Tyler Goodson and two from Mekhi Sargent to go up 24-7 at the half. In the second half, Iowa started the scoring with a 3-yard touchdown where Monte Pottebum shoved Spencer Petras into the end zone. Late in the third quarter, Penn State switched to Sean Clifford at quarterback and he proceeded to throw touchdowns on the next two offensive plays for Penn State to pull within just 10 points. Iowa’s defense then stepped up again and picked Clifford off twice, once on a tipped pass resulting in a field goal and a beautiful 71-yd pick-six by Daviyon Nix for a 41-21 victory in favor of Iowa.

The offensive line was dominant again. Alaric Jackson was being talked about as a first-round pick before the season and has cemented his place with dominant performances. Center Tyler Lindebaum is currently the top rated center in the country. The line pushed Penn State around all game and allowed the run game to flourish while Petras had time to complete passes. The dominant line play allowed Iowa to put up 361 total yards (186 passing, 175 rushing). Mekhi Sargent led the rushing attack with 101 yards on 15 carries and two touchdowns. Tyler Goodson added 78 yards on 20 carries and a touchdown behind the dominant play of the offensive line. Petras put in a solid performance at quarterback, spreading the ball around to eight different receivers on the way to a 18 of 28 for 186 yards on the day.

Spencer Petras has been steadily improving every week and, while still not great, keeps moving in the right direction. He has been within a foot of six deep touchdown passes this season and just needs to improve his accuracy to be a legitimate deep ball threat. I also want to take a minute to recognize Monte Pottebaum. The fullback for the Iowa offense had his name called more than any other Hawkeye by the commentating crew. He had a critical block on Sargent’s second touchdown run and made his presence felt all game. This guy is a stud that loves to hit people and is fun to watch. All that being said, this offense is going nowhere but up and expect them to continue to improve as the season goes on.

The Iowa defense also put on a dominating performance forcing four turnovers (two fumbles, two interceptions). Nick Niemann led the way with 17 tackles and was near the ball on every play. Chauncy Gholston had a dominant day at defensive end with four tackles, a sack and an interception off a tipped pass. Daviyon Nixon also made his presence felt with a late game interception that he returned 71 yards to put the game on ice for the Hawkeyes. The return was a thing of beauty and included Nixon putting a juke on Clifford that left him in the dust near the sideline. Throughout the game, the Iowa defensive line made their presence known, allowing the leading rusher for Penn State only 34 yards. It was an old fashioned beatdown from start to finish for this defensive unit and exactly what we expected them to do.

Overall, it was a quiet Iowa victory with very few big plays and little excitement. Just Iowa being Iowa, winning the battle in the trenches and grinding their opponent down. Iowa is no longer in control of their own destiny in the West, but has positioned themselves to run the table and be in the discussion for a division title. After the disastrous first two weeks of the season, it looks like Iowa has figured it out and will be making, at the very least, another bowl appearance this season. GO HAWKS!!!