Garza, Hawkeyes set to start their run to the top 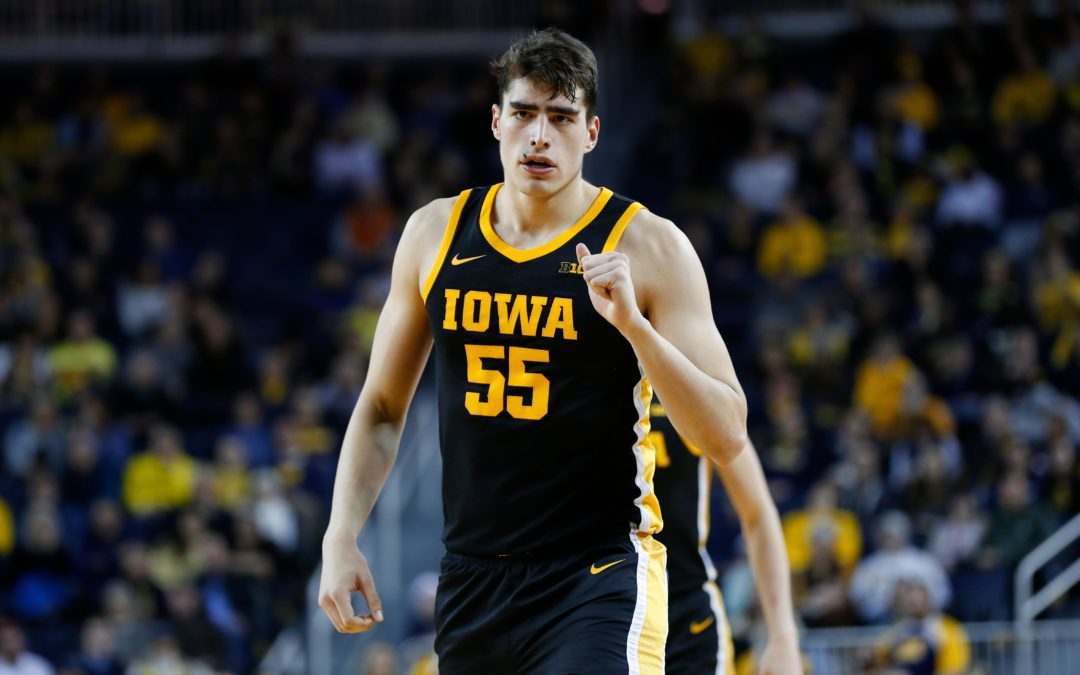 The NCAA basketball season starts Wednesday and the Iowa Hawkeyes are coming in hot. This season is Big 10 championship or bust. Iowa is returning Luka Garza, Jordan Bohannon and Connor McCaffery to lead the charge. Bohannon is coming off playing just 10 games last season before taking a medical redshirt to have hip surgery. In those 10 games, he averaged 8.8 points and 3.3 assists while shooting 32.8 percent from 3-point range. McCaffery is looking for a breakout year after averaging 6 points, 4 rebounds and 4 assists last season with less than one turnover per game. The heart and soul of this team is Garza. He had a solid Player of the Year campaign last season averaging 24 points and 10 rebounds. He explored entering the draft before coming back for his senior year and will be on a mission. Expectations are high in Iowa City so expect Garza to deliver. I am going to do a quick breakdown of the season and what to expect.

The Hawkeye’s first test will be UNC in the Big 10/ACC Challenge. The Tar Heels are led by Garrison Brooks, a 6-foot-10, 240 pound forward. Brooks averaged 17 points and 9 rebounds last year and was a force on defense. UNC also has high hopes for Caleb Love and Leaky Black to step up and make this Tar Heel team a force to be reckoned with. Iowa can win this game, but will need perimeter production from Bohannon and McCaffery to keep the defense honest and leave Garza in one on one situations in the post.

Following the big matchup vs UNC, Iowa faces Iowa State and Northern Illinois. Both these games are winnable, although Iowa State is a possible let down game. If Iowa gets the big win against UNC, look for Iowa State to give Iowa a challenge and possibly even pull off the upset.

Next up is No. 1 Gonzaga. This will be a real challenge for the Hawkeyes as the Bulldogs focus on playing up tempo and scoring in transition. The Hawkeyes will have to focus on slowing down guards Joel Ayayi and Corey Kispert while forcing the Bulldogs to play half court basketball. Luka Garza will need to be at his best and lock down Drew Timme in the post if the Hawkeyes have any chance of winning this game. If Iowa can slow the tempo and make Gonzaga play the Hawkeye brand of basketball, Iowa can win.

Iowa comes off the hardest game of the year and heads straight into a very tough conference schedule. The Big 10 is arguably the toughest conference in the country this year with seven teams in the AP Top 25. Iowa leads the way at No. 5 with Wisconsin (7) and Illinois (8) joining them in the top-10. The Big 10 is going to be tough this year from top to bottom and expect a lot of close games. I am going to look at the three top teams Iowa needs to beat; Wisconsin, Illinois and Michigan State.

Iowa will face a very good Wisconsin team Feb, 18 and again on Mar. 7 to finish the season. Wisconsin is returning four starters from a very dominant 19-20 squad and is looking to make a splash this season with a deep postseason run. The focus for Iowa will be big man Nate Reuvers. The senior has improved every season and looks to build on a team leading 13.1 PPG from last season. He is dangerous inside and also a 33 percent 3-point shooter. The focus for Iowa, at the risk of sounding like a broken record, will again be Garza’s play on defense. If Garza can lock down Reuvers on the inside and force Wisconsin to play perimeter offense, Iowa wins. If Reuvers can dominate inside, Iowa loses. This series could very easily split and set up an interesting Big 10 Tournament matchup. I would look for Iowa to win at least one of these easily and win the second or, worst case, lose a close game.

Michigan State enters the season ranked No. 13 and will be looking to beat Iowa in order to climb the rankings in conference play. Michigan State will be looking to overcome the loss of guard Cassius Winston and make a deep run in the postseason. Leading the charge will be sophomore Rocket Watts and fifth year senior Joshua Langford. Watts will provide a legitimate scoring threat from deep and Langford will provide the voice of experience leading the team. The biggest question for Michigan State is at the center position. The loss of Xavier Tillman hurts at least as much, if not more than, the loss of Winston. This gives the Hawkeyes an opportunity to let Garza exploit the post on offense and make high percentage shots. On defense, Iowa needs to focus on locking down Watts on the perimeter and forcing the Spartans to put the ball inside where Garza can dominate. I think the drop off in talent will be too much for the Spartans and Iowa takes both games in the series.

The Hawkeye’s biggest challenge in conference play will undoubtedly be a very tough Illinois team. They only face each other once (Jan. 29) and I think this is a preview of the Big 10 Tournament championship. Despite being ranked just behind Wisconsin, I feel that Illinois and Iowa are the two best teams in the Big 10. Illinois returns Ayo Dosunmu and Kofi Cockburn from a dominant squad last season that was poised to make a deep tournament run. Everything for Iowa keeps coming back to Garza and this game is no different. Everyone in the country is going to be watching Garza vs Cockburn at the end of January and expect fireworks. Cockburn blocked Garza’s game winning attempt last year to give Illinois the win last year and you can guarantee Garza hasn’t forgotten about it.  This will most likely be the highlight game of the Big 10 conference schedule and will not disappoint. Look for Iowa to focus on exploiting matchups and strong perimeter shooting to attempt to make Cockburn a non factor. This game is there for either team to win. Additionally, this will affect the rankings going into both the Big 10 Tournament and March Madness.

In summary, expect Fran McCaffery to lead Iowa to a monster season with less than five losses heading into the postseason. Jordan Bohannon and Connor McCaffery will have breakout seasons and Garza will be the best big man in the country. The Big 10 championship and a top-3 seed in the dance are within reach and Iowa will be going hard. LET’S GO HAWKS!!!!