Union’s Hamilton blessed for the opportunity 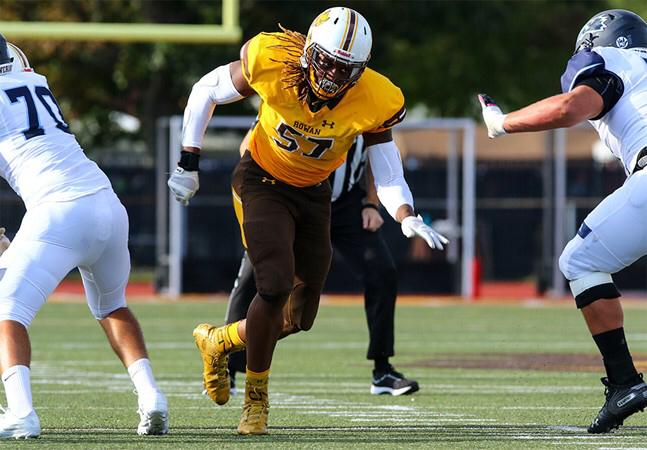 Eddie Hamilton III is a fresh name to watch out for in arena football. He played last weekend for the Pennsylvania Union’s farm team, the Capital City Cougars against the Jersey Bearcats. His stat line was crazy, to say the least. Hamilton had three quarterback hurries, three quarterback hits, six tackles and three tackles for loss. In one of those tackles, he absolutely mauled the Bearcats running back. The running back was pulling a little Le’Veon Bell dance behind the line only to find Hamilton back there to annihilate him.

Coming into the year, Hamilton came out of Rowan University to find himself at the National Scouting Combine. But first, let’s talk about how he came to be a great player. He went JUCO initially then to Shepard University, a Division II program in West Virginia, to become the only freshman to make the traveling squad.

Around the NFL Draft, Hamilton posted that video to his Twitter page and it is crazy. It just shows how hard he hits. That is a live tree that he tackles out of the ground. That is not a dead tree like the majority of other players post. If Hamilton can do that to a tree, just imagine what he is doing to an actual player. At 6-foot-5, 260 pounds that hit is going to absolutely annihilate someone.

Hamilton actually had not taken the field since November last year at Rowan until his game as a Cougar last weekend. Hamilton says “it’s a blessing” that the opportunity kind of just fell into place at the right time. His time as a Cougar is helping him get ready for action when it time time in 2021 to play for the Union.

The Cougars are coached by the Union quarterback Calvin Lowe, who has a vast amount of arena experience. Hamilton and Lowe already have great camaraderie, even prior to the Cougars, so it should be an iron sharpens iron type of play.

All teams need to take notice of Eddie Hamilton III. He could take the league by storm.