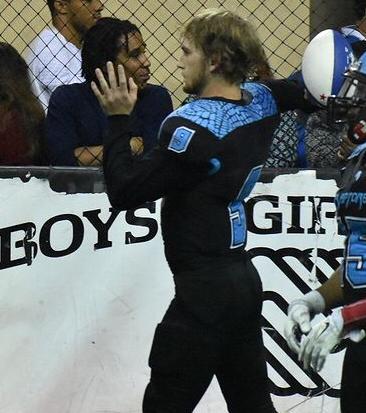 Tanner White, the quarterback of the Berks County Raptors, looks to keep up the dominance that he has showcased the past few seasons. That includes roughly 35-plus wins of the Raptors 50 wins in a row.

“It feels good,” White states. “As long as I’ve been here with the Raptors we’ve won. I want to continue the winning streak and win another championship. I don’t plan on taking an L and snapping that streak.”

White keeps his mind quiet during the game and plays with full intensity every single play. He certainly shows that on and off the field, especially against the Jersey Bearcats last season. White faced another great MIFL quarterback John Mercier and came out with the victory.

“My mindset going into the season is the same that it always is which is to dominate every time we are on the field,” White said. “Execute every time the offense is on the field and score on every possession.”

Throughout this crazy year with many uncertainties, White doesn’t let it phase him. He keeps grinding day in and day out.

“I’ve been going to the gym and playing flag football as much as I can to stay in shape,” White shares. “I’ve had contact with some of the wide receivers and we plan on meeting up and going through the route tree and the playbook to be ready before camp comes around.”

Tanner White is easily one of the most underrated quarterbacks that are out there. He was actually recruited by the Raptors while playing a game of flag football at the Raptors arena, Relevant Sports Complex, and then signed all the way back in 2017. As some say, White is a magician. He is like an arena football Johnny Manziel. He makes tight and tough throws look easy; one of which plays was in a game he was about six inches in the air being tackled and still made the throw for a touchdown.

Be sure to keep an eye on Tanner White this season. He will surely put on a show.