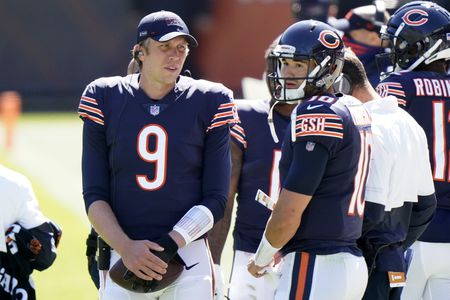 The Bears have several problems on the offensive side of the ball. I don’t know how to fix them all but it appears that neither does the Bears front office or coaching staff. One of the most glaring problems has been quarterback. The problems started during the offseason when they paid Nick Foles 20 million dollars to be the back up for Mitch Trubisky. Trubisky was named the starter going into the season and was promptly benched three games into the season for Foles. The Bears have since gone 2-5 and are 5-5 heading into their bye week. Trubisky is out, either with a shoulder injury or a lack of desire to play. Foles was injured at the end of the debacle that was the Vikings game and it is unclear if he will be back to face the Packers in Week 12 or not. Honestly, it doesn’t matter. The Bears are done. The “winning ugly” attitude from Nick Foles only works when ugly is winning. Right now it’s not. I could probably write a novel on the problems the Bears have at quarterback, but that’s not the point of this article. How do the Bears fix their QB problem?

Long term, it’s a simple answer. You cut/trade both Foles and Trubisky and draft or sign a quarterback. Rumor mills have them going after Zach Wilson out of BYU. This would be a solid choice and probably available in the draft at the Bears position. Wilson has thrown for 2,512 yards with 22 touchdowns and only two interceptions so far this season. He is a strong passer and has drawn comparisons to Aaron Rodgers and Pat Mahomes. I have no problem with this pick, mainly because it can’t be worse than what we got. Wilson also has a completion rate nearing 80 percent and that is an area both Foles and Trubisky have struggled in.

Short term, it’s a not so simple answer. With Trubisky and Foles both possibly out for Week 12 Chicago may have to turn to Tyler Bray. The Bears obviously don’t think so because they gave DeShone Kizer a tryout this week. Go back and read that line again. DeShone Kizer, who formerly played for the Cleveland Browns and Green Bay Packers. Things are so bad in Chicago they are trying out Cleveland’s leftovers. For his career, Kizer has 11 touchdowns, 24 interceptions and a completion rate barely over 50 percent. He solves absolutely zero problems for the Bears offense.

The current free agent list includes names like Matt Simms, Chad Kelly, Jordan Ta’amu, Jake Rudock and Brian Lewerke. Out of all these guys, the Bears called Kizer. I have literally no idea what the front office is thinking right now. There was also a little thing called The Spring League that just ended. The last week of the Spring League had three out of six quarterbacks going over 240 yards passing. Kevin Anderson and Bryon Scott combined for over 600 yards and six touchdowns last week. Shea Patterson had three interceptions, but also 241 yards, two passing touchdowns and a rushing touchdown. Why not give one of these guys a call over Kizer? Kizer has had a shot and proved he doesn’t belong. I think Shea Patterson is a long way from being NFL ready, but at least he could run away from the defense when the line misses blocks. Worse case scenario? The Bears bring in one of these guys to back up Foles and they suck.

We aren’t any worse off than we were to begin with. Best case? The Bears find a solid back up or a guy that competes for starts at a much lower price tag than either Foles or Trubisky. That way they can focus on the offensive line in the offseason. The Kizer move makes absolutely no sense with the talent that is available. Bears fans, we are just going to have to bear down and hope someone in the front office finds a brain.