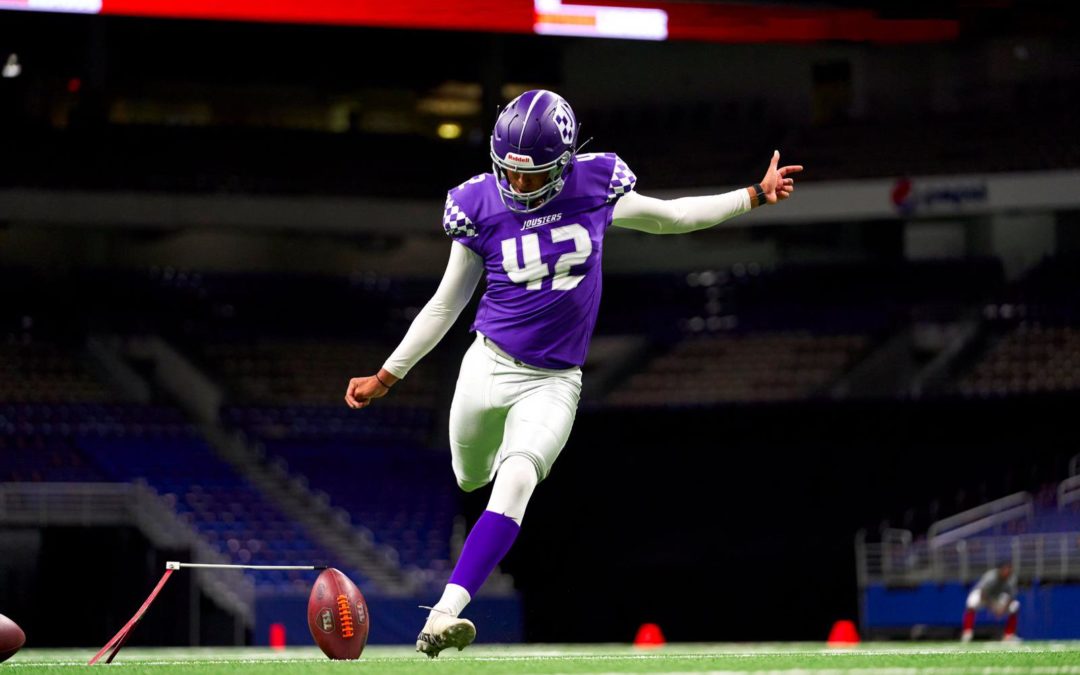 The Jousters’ season officially came to a close after just two games where they suffered defeat in both. They went 0-3 but the final game against the Alphas was canceled due to a positive COVID-19 test from the Jousters. The Jousters received the loss due to the league’s protocol.

In the two games played (neither televised, they were essentially dark-matches in pro wrestling terms), the Jousters did showcase some standout players. Their record may not show it but they did.

First up is the only player to ever score as a Jouster in kicker Ricky Aguayo. He is the brother of former NFL second-round draft pick of the Tampa Bay Buccaneers, Roberto Aguayo.

The Jousters scored 15 points in two games, all off the foot of Aguayo. He scored every point in their second outing where he hit on all five of his field goals against the Generals.  His field goals were from 33 yards, 37 yards, 50 yards, 41 yards and 48 yards. Aguayo did not even play in the first game.  In one game, he made his presence felt, seen and heard. An NFL team should be giving him a call without a question.

Second on the list is running back Cedric O’Neil. He is a dual-threat style player. He will tear up a team on the ground and catch passes. O’Neil rushed for 87 yards on 27 attempts and caught eight passes for 65 yards (63 yards came against the Generals).

Neither of those may be ‘wowing’ to a modest viewer but combine them and it adds up to 152 yards, which is pretty good for two games. The Valdosta State product is 6-foot, 215 pounds. That is a great size for a running back in the modern day.

The third player on the board has to be the big wide receiver Charlie Jones. At 6-foot-4, 205 pounds, he manhandles coverages and is not afraid to jump up and make a play. Jones had six receptions (five against the Generals) for a total of 99 yards in two games. One yard away from the century mark in two games on not many targets is not bad at all.

Honorable mention is going to have to be the lefty quarterback himself Alex Hornibrook, a product of Wisconsin and Florida State. Let’s start out with the rough to rip the metaphorical band-aid off. Hornibrook never had a touchdown, he threw two interceptions.

Alright, now that that is off the table onto the good. Hornibrook actually is decently accurate completing 62 percent of his passes.  He passed for 451 yards in two games, including his 279-yard performance against the undefeated Generals.

If you dive into Hornibrook’s stats he actually had a good showing. If he tossed in a couple of touchdowns it would have been a lot more appetizing.