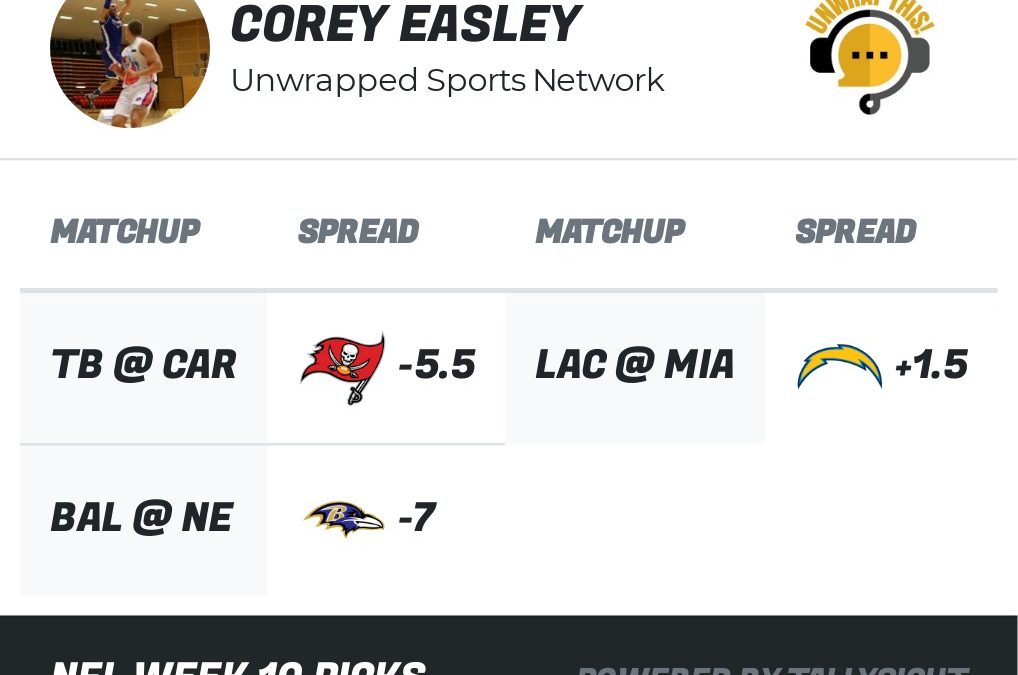 What a week as I went 3-0 in Week 9 and couldn’t be more thrilled. Underdogs kept it up last week and we rode them in last week’s article. In Week 10, we look forward to another week and it almost feels as if we have trains roaring down the same track with the pandemic and NFL season. Teams are still being monitored heavily and some of the lines are impacted throughout the week. Case in point the Bengals/Pittsburgh line was all over the place this week due to Big Ben’s status. We will attempt to go 3-0 this week again amongst all of it and get ready for the holiday season.

I took the Panthers last week because they matched up well against the Chiefs. This week is an entirely different story. They get to face the wrath of Tom Brady who is 17-3 ATS (Against The Spread) after losing by 20 or more points in a game. That is not the only reason of course. Christian McCaffrey is injured again with a shoulder and will miss Week 10. Teddy Bridgewater has played well, but has struggled versus pressure. Unfortunately, for Teddy, he faces one of the best rush teams in the NFL this week. Brady also struggles against pressure, as we saw last week, yet Carolina is not where it wants to be when it comes to pressuring quarterbacks this season. I see this game getting out of hand for Carolina and Tampa Bay rolling in this one. Look for Brady to dissect this defense as they tend to play more zone than man. Brady against zone has been good and add in the fact that Carolina doesn’t get much pressure, he should have a field day. Tampa Bay wins comfortably.

Everyone is in on the Miami Dolphins, and rightly so. Coach Brian Flores has the team playing at a high we haven’t seen from a Dolphins team in you know, forever. Tua Tagovailoa looked good last week after a shaky first start, but the missing pieces are beginning to mount. Myles Gaskin is still on the IR, Jordan Howard looks cooked and Matt Brieda is questionable coming in. Preston Williams also went on the IR this week, and maybe we see more of Jakeem Grant and Lynn Bowden Jr. The Chargers come in with a quarterback who is the favorite to be the Offensive Rookie of the Year in Justin Herbert and the Chargers have struggled to get out of their own way this year; losing close game after close game. Christian Wilkins and Kyle Van Noy are big outs to this Dolphins’ defense and I expect the Chargers to come out gunning. Despite paying big bucks for secondary help this season, the Dolphins will have to contain Keenan Allen. I like the matchup for the Chargers offensively and if they can do enough on offense I am not sure Tua is quite ready to lead any type of comeback.

A lot of naysayers are saying the Ravens aren’t that contender we thought they were coming in but I would beg to differ. Their early down efficiency running the ball this year is way down and injuries on the offensive line haven’t made it any easier. They handled the Colts last week in the second half, moving to a more uptempo offense. This week they get a lot easier matchup in a Patriots’ defense that is literally a shell of itself from the 2019 version. The Patriots currently rank 31st against the run and traditionally have struggled versus dual-threat quarterbacks throughout the years. The Ravens should have their way with the defense that badly missed Lawrence Guy last week on the defensive line. If he is out, I believe it eliminates any chance short of heroics on offense to win this game for the Patriots. On the offensive side, the Patriots will get back Damien Harris, who left early last week, and N’Keal Harry. The Patriots offense ranks 28th in passing DVOA and third in rushing so look for more of the same from the Pats’ offense against a Ravens front seven that can be ruthless. Cam Newton will have to prove he can be successful versus pressure because the Ravens bring a lot of it and will in this one as well. As much as I believe the Patriots will play them tough it won’t be enough.

I appreciate you taking the time to read this week’s article. If you want to hear all my sides and player props make sure to tune into the Bets Unwrapped podcast on Spotify. Make sure you check out mybookie.ag and use the code USN100 for a 100% deposit match +15 dollar bonus. Go and signup now. Follow me @Cmoney52 and let me know who you are wagering on. See you soon!!