Iowa runs over the Gophers 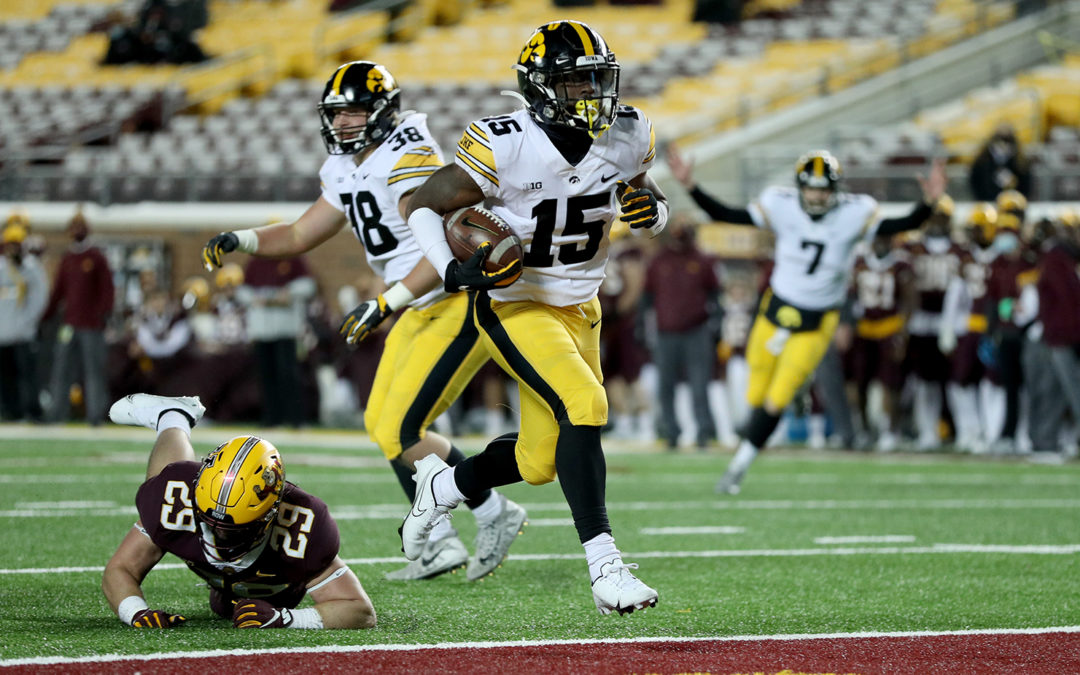 Iowa is back, baby!! After a rough start to the season, the Hawkeyes have bounced back with back-to-back dominant defensive performances leading to wins. Friday night the Hawkeyes rolled into Minneapolis and ran roughshod all over the Gopher squad. It was a dominant performance from start to finish on all sides of the ball. I will do a quick recap of the scoring and then takeaways.

Iowa’s defense came out hungry and wouldn’t give Minnesota any room to move in the first half. The offense was slow, taking a 14-0 lead into halftime on rushing touchdowns from Tyler Goodson and Nico Raigini. The third quarter was slow for both teams with no points scored and this game was shaping up to be a Big Ten defensive battle. Iowa then proceeded to blow up in the fourth, scoring 21 points. Ihmir Smith-Marsette had an eight-yard receiving touchdown, Goodson added another rushing touchdown and Mekhi Sargent also ran one in. The Iowa defense did give up a garbage time touchdown on a pass from Tanner Morgan to Rashod Bateman with 14 seconds left for a final of 35-7.

I usually start with the offense but the defense was the star of this game from start to finish. Minnesota was able to muster 312 yards of offense to Iowa’s 346. This stat makes the game appear closer than it was because Iowa’s defense allowed yards but not points. It was a classic bend don’t break game that included two drive ending interceptions. Defensive end Zack VanValkenburg had a breakout game as he lived in the Gopher backfield, totaling five tackles and three sacks. He was a problem for Tanner Morgan on every pass play. Riley Moss added an interception inside the 10 that he returned for 57 yards to end one of the Gopher’s best drives of the day. Minnesota never stood a chance against this defense and was pushed around all day. Give VanValkenburg player of the game honors and every offensive player should be buying the defense beer after this performance.

The offense continued to be OK. Brian Ferentz seems to have figured out that the O-line and the running game are Iowa’s strengths. Spencer Petras continues to be good, but not great. He was 9 of 18 for 111 yards with one touchdown and an interception. These are not great numbers, but enough to win and that’s all we can ask for at this point. Petras will not be the player to carry this offense this season. He has potential and could be that player in the future, but he is not this season. The Ferentz’s seem to have realized this and allowed the running game to dominate.

Goodson had 20 carries for 142 yards and two touchdowns. Sargent backed him up with nine carries for 86 yards and one touchdown. The star of this offense was definitely the offensive line. Both backs were getting three or four yards downfield before they had any contact on almost every play. The holes being opened up were big enough to drive multiple Mack trucks through. This took the pressure off Petras and allowed him to manage the game to where he didn’t have to force throws. This allowed him to complete good passes and show his potential. Petras dropped an absolute dime of a pass to Shaun Beyer for 28 yards to set up first and goal that showed how good he could be.

This is what is most frustrating about Petras. He will drop a dime one play and overthrow his receiver by 10 yards or force a throw into coverage the next play. He showed flashes of greatness but still showed issues with accuracy and consistency. Overall, Petras’ performance didn’t matter as the offensive line and defense carried this team to victory.

Looking forward, Iowa has a very good chance to run the table; with the exception of Wisconsin. However, Wisconsin has to come to Kinnick and (ask OSU) Kinnick is where championship dreams come to die. That being said, even if they lose to Wisconsin, winning every other game would salvage the season after a terrible start. Enjoy the victory Hawkeye Nation and GO HAWKS!!!