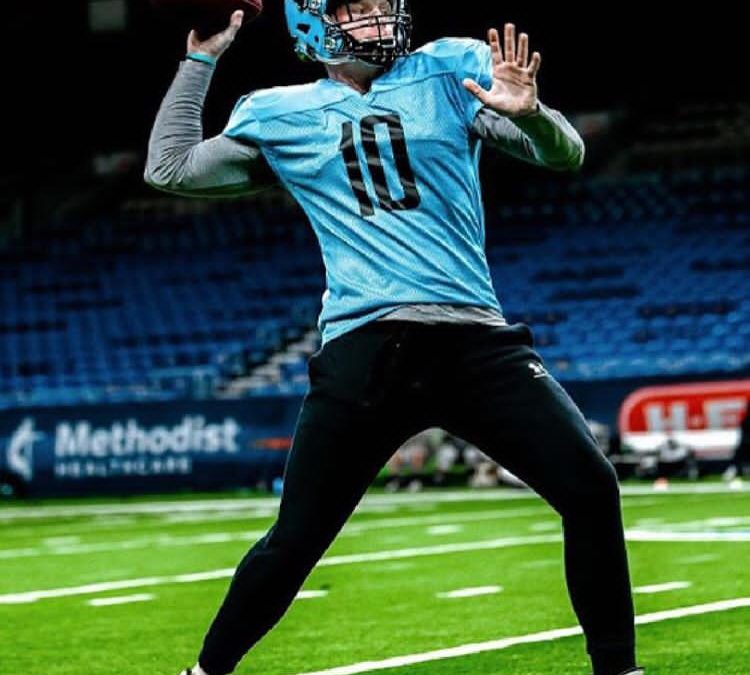 George Bowen, the quarterback of the Aviators in The Spring League, is truly a hidden gem. Bowen has been behind CFL veteran quarterback McLeod Bethel-Thompson on the depth chart.

Bowen started his college career at the JUCO level at Mt. San Antonio College before traveling to Serbia to play professional football.  He cherished his time in Serbia playing as a Belgrade Blue Dragon.

“It was an amazing experience,” Bowen said. “Definitely unique and presented some challenges but at the end of the day I was just so happy to be playing football and the people involved with football over there were so amazing. It was a great experience. His team actually made it to the championship game in the Serbian Superleague (SAAF).”

After coming back from Serbia, Bowen decided to take the opportunity to play in The Spring League as an Aviator. As we know, the Aviators were shown last night live on FS1. Bowen embraced that feeling coming from the Serbian league to play on live television as soon as he stepped in.

“It was great,” Bowen replied. “The Alamodome on national television is a pretty cool platform to get to play, especially with me being from a small town in Kentucky and playing in Serbia. It was selfishly a gratifying moment.”

From the JUCO level to Serbia to ultimately returning to the US to play in The Spring League, that had to be a grind. He has always been an underdog and never lets that stop him from playing his best each time he steps on to the field.

“Absolutely it motivated me,” Bowen stated. “At Mt. SAC we had a bunch of dudes on our team and that was really the first time I had ever seen elite players before. So I found out quickly if I wanted to play at the level I want to play at (still want to play at) I had a lot of work to do as a player to get there. Mt. SAC has a statue that says ‘where the world’s best athletes come to compete’ and I tried to take that to heart every day so I could improve.”

The Spring League sends many players to the NFL and CFL. In fact, they’ve sent the most of any showcase league. With that being said, Bowen was asked how it would feel after all the adversity to sign a NFL or CFL contract.

“It would be a great moment for the people who have helped me continue to play football because it’s been a journey so far but it would also be the beginning,” Bowen said. “The other quarterback on our team [McLeod Bethel-Thompson] has many great pieces of advice and one of them is the reward for hard work is more hard work so it would just be the beginning of a lot more hard work for me.”

Playing in the Alamodome had to be surreal especially if you’ve ever seen a Serbian league stadium. Some of them are not the best-looking. So that being said, Bowen said what it is like to play at a great stadium like the dome.

“Just the atmosphere,” Bowen said. “I grew up going to football games in huge stadiums so to get the opportunity to play/practice in one definitely makes eight-year-old George smile.”

Finally, we delve into the quarterback room of the Aviators and what he’s learned behind Aviators’ head coach Terry Shea.

“Coach Shea drafted some really great players so just getting those players the ball and being efficient in that,” Bowen said. “I have had a great example in how to play the position at Mac so my personal game plan would be to just try and do what Mac would do.”

Bowen saw some minor action in last night’s loss to the Conquerors 42-19 after Bethel-Thompson was pulled late in the fourth quarter. Could we see a bit more action from Bowen next week? We will have to stay tuned to find out.

George Bowen is certainly a sleeper, and quite possibly, the most underrated quarterback in the entire Spring League.