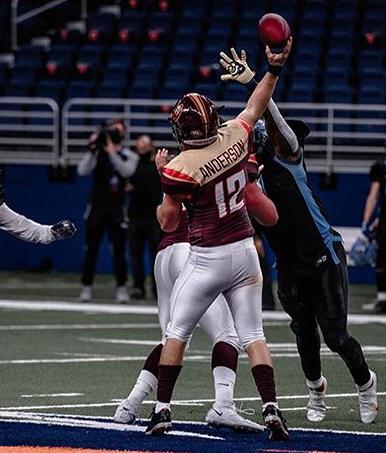 The Conquerors made the right decision sticking with Kevin Anderson this week as it led to a big win against the Aviators. Anderson did have some newfound quarterback competition this week with the Conquerors signing Tennesee Titans’ draft pick Cole McDonald and JUCO standout Connor Kaegi to play quarterback.

Anderson came right out and proved why he deserves to be the starter. He dropped a dime to Nate Holley, which was very similar to his dime last week to Vinny Papale.

The heart Anderson has is unmatched. There were a few calls that were questionable, such as the penalties and not going for it on fourth down with a 50-yard field goal on the line, but the field goal was made so it turned out not mattering. He stayed level headed and never let it get to him.

The story of last week’s game was not the same at the half. Coach Glanville brought Anderson back out in the second half to play and Glanville has to be happy that he did.

Anderson put on an aerial clinic. In the third quarter, he already tallied almost 300 yards.

The fourth quarter was mainly a rush attack due to Conquerors being up 35-19. Anderson did have a few more passes but mainly screens for under 20 yards. A pass interference set up a pass to Dan Williams III for Anderson’s second touchdown pass of the night.

This game surely shut up any doubter that Anderson had. He had competition breathing down his neck and seized the moment. Surely, an NFL team was watching his game.

Anderson’s final line was very impressive. He led the Conquerors completing 26 of 32 passes for 327 yards for two touchdowns and two interceptions.

The final drive the Conquerors put in Cole McDonald but the game was already out of hand.