Connor Kaegi Signs with the Conquerors 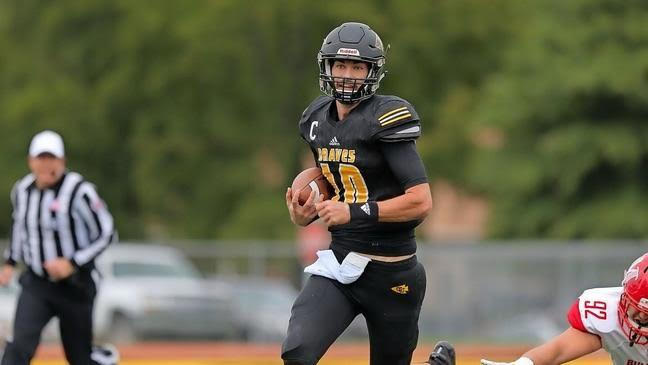 Connor Kaegi has signed with the Conquerors of The Spring League. This was a corresponding move to the release of Justin McMillan following his dispute with an Alphas’ coach.

Kaegi brings a lot to the table including his 6-foot-7 stature. His name on Twitter is “2Tall” for a reason. Being a tall quarterback certainly has many advantages.

As an Ottawa Brave in college, he looked very good.  He played 18 games as a Brave throwing 52 touchdowns to just 16 interceptions, alongside 4,595 passing yards. Kaegi also showed good accuracy completing 58.9 percent of his passes.

Kaegi actually played in The Spring League last year as well, so he is no stranger to having to compete for his spot. The trait of always being an underdog seems to be manifested within a lot of JUCO football players like Kaegi was at Ottawa.

Overall, joining the Conquerors could be a good thing for him. He will have a good quarterback room surrounding him with Kevin Anderson and yesterday’s signing Cole McDonald.

The quarterback will most likely be Anderson, McDonald and Kaegi. There is no reason to sleep on Kaegi though. Honestly, it seems like he may have a bigger arm than McDonald does. Kaegi can run when needed, but shouldn’t be classified as duel-threat.

A good comparison for Connor Kaegi would actually be the Generals quarterback Zach Mettenberger. They are both tall and strong quarterbacks with big arms that can move out of the pocket when needed.

The Spring League is a showcase league, especially with Conquerors coach Jerry Glanville. It seems like he tries to play everyone as opposed to some teams sticking with just one quarterback like the Alphas have with JT Barrett or the Generals with Bryan Scott; who is a front runner for MVP.

Kaegi is certainly a player to keep an eye on. He has a ton of potential.