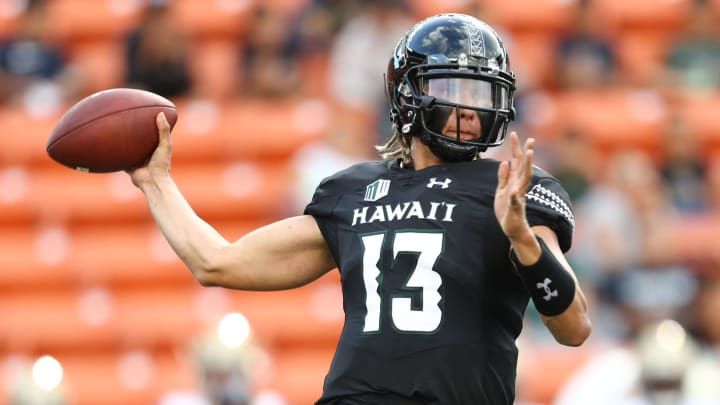 Cole McDonald has signed with The Spring League Conquerors. He was selected in the seventh round of this year’s draft by the Tennessee Titans.

Former @HawaiiFootball QB and 2020 @Titans #NFLDraft Pick, Cole McDonald has been added to the Conquerors roster at #TSL2020. 🤙 pic.twitter.com/bPSHaKlTzY

The quarterback joins the Conquerors after last week’s brawl including another Conqueror quarterback, Justin McMillan, who got into a physical altercation with an Alphas’ coach during the game. There is no statement on the league’s punishment being that it is a pay-to-play showcase league. McMillan could of very well had his time terminated.

There is no place for this in football.. McMillan gets into a fight with an Alpha coach.. pic.twitter.com/pmMUhgPM7C

McDonald brings much more to the table than McMillan ever did. McMillan always looked very drab and unmotivated during any time that he played as a Conqueror.

McDonald was a two-year starter at Hawaii (played six games as a sophomore). He passed for 8,032 yards, 70 touchdowns, 24 interceptions and a 146.8 passer rating.

Much like resident Conqueror quarterback Kevin Anderson, McDonald is dual-threat too. He rushed for 880 yards and 12 touchdowns on 251 attempts.

Just because McDonald was a draft pick does not mean he should be brought in with a silver spoon in his mouth. He was just brought in three days prior to a game. Anderson has always looked good any time he has played. There is no reason to have McDonald jump right in and start.

Anderson would have had a great chance to win the Alphas game if it was not for McMillan’s bad drives and antics. Anderson always stays level headed, as well as, being a team player. McDonald has looked like a good leader too. Perhaps Anderson and McDonald could put their minds together to help the rookie.

Glanville made a mistake letting McMillan come in and run the game through the shredder. Let’s hope Glanville learned from it and will help McDonald. He is a good young player, just needs the right coach and quarterback room.

It was a good choice for McDonald to join the Conquerors, but he should not start.

Leave the starting role to Kevin Anderson. He has put so much into his craft and even the team in just two games. He deserves it, so let him run with it. The sky is the limit.