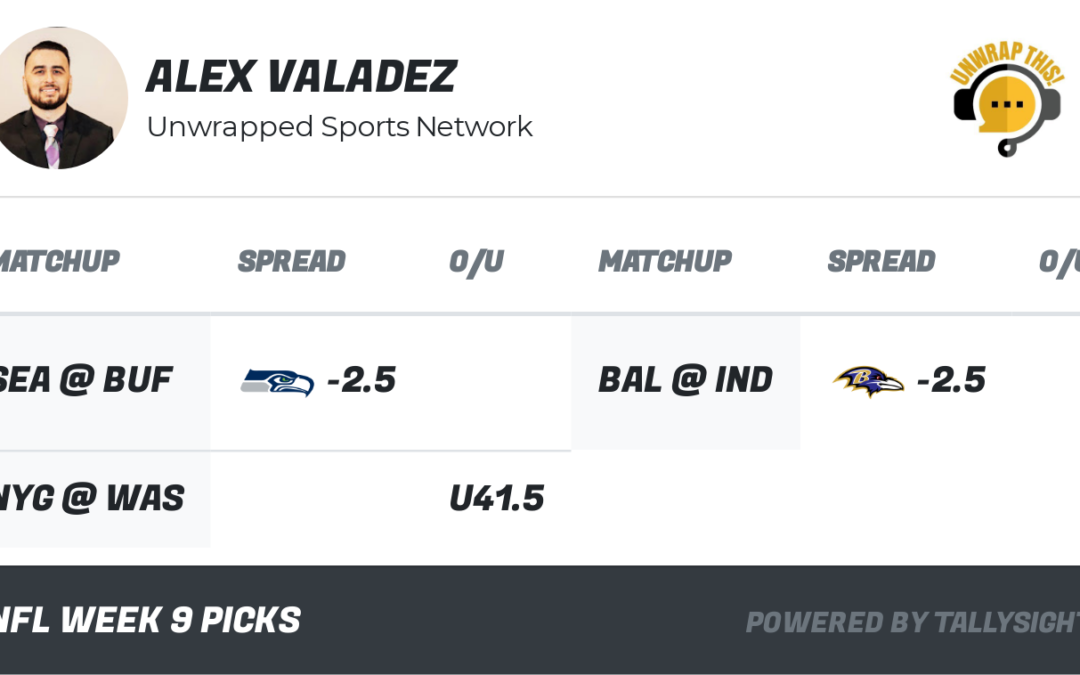 Back at it after missing Week 8 for another shot at the weekly locks for the NFL slate. Feeling REALLY good about my three picks this week. Let’s get right to business on my picks for the week!

Russell Wilson is the leading the MVP race this year so naturally this offense should continue to perform. The Bills currently have a -1 point differential (this is for the entire season). The Bills started the season on a four game winning streak but since then the offense does not look the same. Josh Allen and company had trouble putting up points against the New York Jets. The Seahawks defense may not be good but the Seahawks offense will control this game. 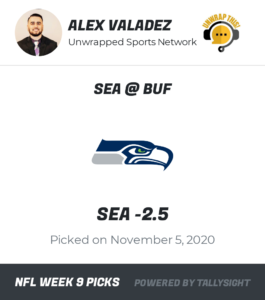 Two offenses who turn the ball over consistently? A defensive pass rush that should grow into becoming one of the best in the league? LOCK THAT UNDER. The Football Team has only gone over to above average offenses. The Giants are anything but below average. I got it at 41.5 and I have seen it go up. SECURE THE BAG! 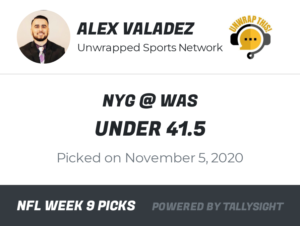 The Baltimore Ravens recently had a tough loss to the Pittsburgh Steelers, where they still ran the ball for over 200 yards. That was against a defense that has previously kept teams in check. I expect this to continue even against a stout rush defense that the Indianapolis Colts posses. The Ravens take an early lead and take control of the game. Phillip Rivers has had two strong passing performances against less than stellar pass defenses. The Ravens should keep him in check. 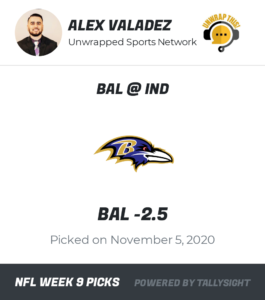 Thank you for taking the time to read this article. Be sure to follow me on Twitter @_alexvaladez for my weekly player props and see my full top-5 locks of the week (graphics by TallySight). Be sure to check out Bets Unwrapped on Spotify where fellow Unwrapped Sports director Corey Easley (@cmoney52) and I break down the weekly bets and be on the lookout for our SUPER PARLAY (12-20 leg parlay to win big money). We are going live every Saturday at 7 PM ET so tune in and ask your questions live. Make sure to check out mybookie.ag and use code USN100 for a 100% deposit match +$15 bonus. Sign up, check out my picks and let’s make some money together! Best of luck and always gamble responsibly.