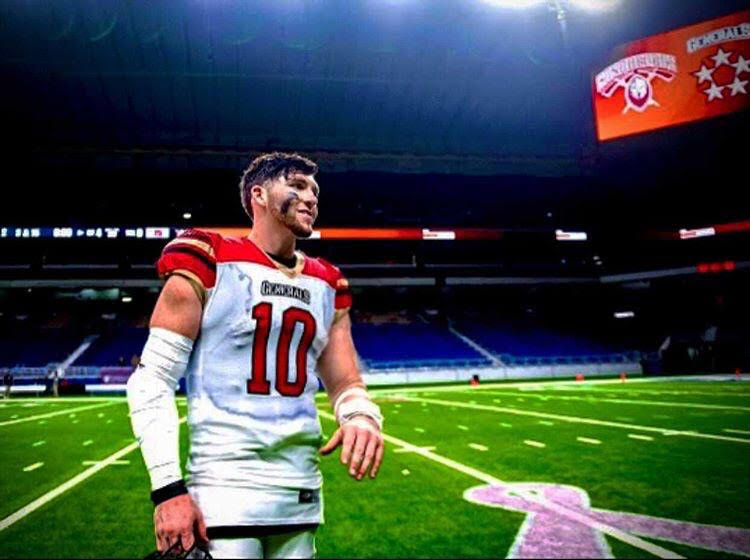 The Generals’ quarterback Bryan Scott has been on fire so far this season. Scott has started both games so far and won both, defeating the Conquerors in Week 1 and the Jousters Thursday night in a 18-15 nail biter. That win lead the Generals to be one of two undefeated teams; the other being the Aviators.

It was a tight game this week and a great game the week before. The Generals and Scott are a cohesive unit to pull through and win these games. “I believe it’s because of our team first mentality both on offense and defense,” Scott said. “We truly believe in each other and play for one another. In such a short time here it’s been special to see this group come together as a family. It’s an honor to be apart of this group of guys and to lead such great football players and people. Our coaches have done a great job as well getting our team prepared each week to put us in a position to be successful.”

Scott had 220 yards in the air along with a touchdown and an extra point conversion in Thursday night’s game against the Jousters.

The Generals steal a win from the Jousters behind a defense that allowed 0 TDs and created 2 fourth quarter turnovers.

Despite the loss, the story of the game is Jousters K @Ricky__Aguayo's perfect 5/5 night.

The Generals improve to 2-0 and the Jousters remain win-less at 0-2. pic.twitter.com/ivw6Bl1Wxq

Scott never flounders under pressure. Actually, he seems to flourish. In college he balled out. In 33 career games he passed for 9,073 yards, 77 touchdowns and 22 interceptions. The Division III product out of Occidental (Oxy) College has even had time with the Kansas City Chiefs, as well as, the Philadelphia Eagles and Atlanta Falcons. The 6-foot-2 quarterback has even spent time north of the border in the CFL with the BC Lions and Edmonton Eskimos. The Eskimos were who he was scheduled to commence play for in 2020 until the COVID-19 pandemic canceled the season.

Scott is no stranger to The Spring League. During the 2018 Spring League season he garnered the Player of The Week honors twice. His talents paid off for him landing him a mini-camp opportunity with the Kansas City Chiefs and Atlanta Falcons.

The Generals quarterback room is bursting with talent between him and NFL veteran Zach Mettenberger. “Zach has been awesome and he has been nothing but supportive and helpful this season,” Scott said playing alongside Mettenberger. “He has a great IQ for the game of football and I have a lot of respect for his knowledge as a quarterback. He is an extra set of eyes that I truly trust to give me good information throughout games and practices.”

He has one of the quickest and smoothest releases of any quarterback. The speed of the ball when it leaves his hand is just crazy. A tight spiral that he can sling it deep. Scott should be on an NFL squad. He has all the right attributes.

But, as far as the Generals are concerned, Scott is running an MVP campaign. Four touchdowns in two games to compliment 524 passing yards. That averages out to be over 250 yards a game, which is great at any standard.

With the Generals gunslinger Bryan Scott having a great season and being a potential MVP, that must come with a lot of perseverance. “Just due to my belief in our team and my preparation coming into this season. I believe In our team and think we can accomplish great things if we continue to improve each week and believe in one another,” Scott said. “The confidence comes from my preparation and my faith in God. The goal is to continue to play at a high level mentally and physically prepare for the upcoming week”