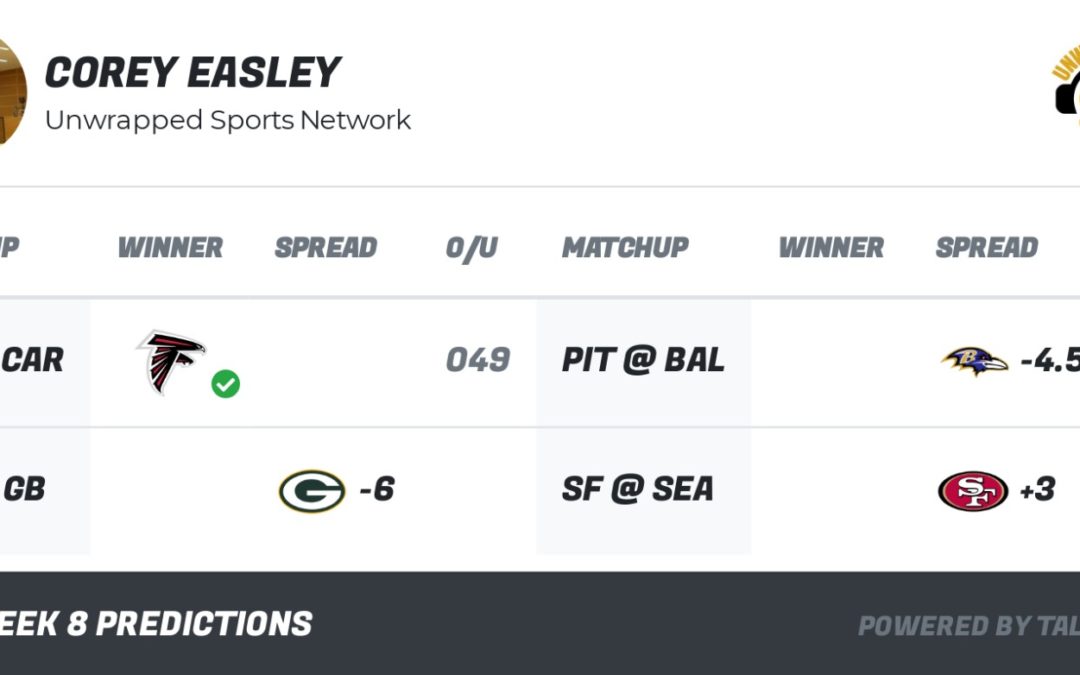 We are back at it after an encouraging week where we went 2-1 and hit the Pittsburgh money line. It felt good to get back in the green and win a couple. Week 7 saw the New York Jets win their first week against the spread. In doing so, that leaves the Dallas Cowboys as our lone 0-7 team against the spread heading into Week 8. The New Orleans Saints and Las Vegas Raiders continue hitting the over on totals and have not played one game to the under. Week 8 has some interesting matchups let’s look at a few of the best.

One of the best games of the weekend, the 49ers, fresh off their drubbing of the Patriots, roll into Seattle who choked away a division game last week. Both of these teams are right next to each other in DVOA Week 7 DVOA Ratings. Both offenses have been playing very well and each team is very different. Kyle Shanahan is doing an amazing job of using the jet sweeps, motions and formations to keep defenses off balance. The Seahawks are relying a lot on Russell Wilson to make something happen. That has worked well for the Seahawks’ offense so far. The problem is the Seattle Seahawks rank 28th on defense according to this week’s DVOA rankings and everyone that has watched Seattle can see why. The Seahawks have been taken advantage of especially through the air where they rank 30th in the NFL. That is not what you are looking for from their defense. The good news is the 49ers do much of their damage on the ground and that is where the Seahawks’ defense excels. That is what makes this game so intriguing and coming into the season the 49ers were the favorite to win this division. The 49ers are trending upwards and I think they do just enough to keep this defense off balance and cover the line.

Another marquee matchup this week and, once again, both these teams are right next to each other in DVOA at No. 3 and No. 2, respectively. The Steelers were fired up to play the Tennessee Titans last week, using COVID delay as something they held against the Titans, and the game was not as close as the score indicated. There is no love lost in this rivalry game and the Baltimore Ravens are coming off a bye. Having a bye week we will (hopefully) see a healthy Lamar Jackson to command this high-powered rush offense back to last year’s form. Playing against the Steelers, it won’t be easy as the Steelers have a great defense. The question with this game is what quarterback will play better. If Lamar can be dynamic and make some plays with both his arm and legs then the Ravens should control this game. Will Ben Roethlisberger be mistake-free? That is what Steeler fans are asking themselves. Jackson will have to make some tough throws in this game and show all over again why he was the MVP in 2019. This is gonna be a joy to watch and I believe the Ravens will do enough to win this one at home.

The 2020 season saw another year of promising Vikings predictions come and fail once again. The Packers came back from a tough loss in Tampa two weeks ago to crush the Houston Texans in Week 7. The Packers’ offense has been great this season ranking fourth in DVOA and Aaron Rodgers looks like an MVP candidate. The Vikings’ defense ranks 15th in DVOA and their offense is currently in the bottom third of the league. The good news for the Vikings is the Packers’ defense is not great and on paper gives the Vikings a nice chance in this one. The path for victory for the Vikings is to run the ball a ton and keep Rodgers off the field to play the field possession game. The Packers, even without Aaron Jones in the lineup, should be able to handle the Vikings upfront and give Rodgers time to throw in this game. The Packers will get up early in this one and force the Vikings out of their conservative mindset and force them into a track meet. The problem with that is I do not believe in Kirk Cousins to win that race. Play your fantasy guys in this game. Should be fun as both of these defenses struggle.

Be wary of games below as the wind conditions are going to be nasty. The Raiders are an over team so far this season at 5-0-1 in 2020, but the line has already moved six points towards the under. Keep an eye on the weather and the wind in that one and if we see some kind of shift jump back on the Raiders and Browns over. The Patriots/Bills is another game in a similar situation that you should keep an eye on the wind situation. The line has moved five points to the under so buyer beware.

I appreciate you taking the time to read this week’s article. If you want to hear all my sides and player props make sure to tune into the Bets Unwrapped podcast on Spotify. Make sure you check out mybookie.ag and use the code USN100 for a 100% deposit match +15 dollar bonus. Go and signup now. Follow me @Cmoney52 and let me know who you are wagering on. See you soon!!