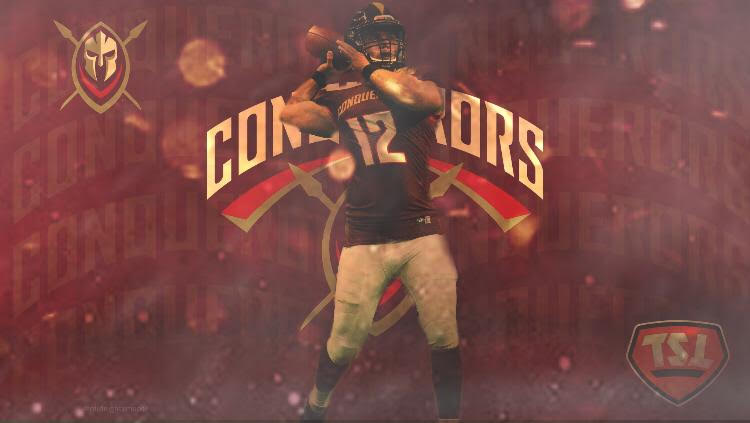 The televised primetime matchup that The Spring League showcased this week on FS1 featured the Generals vs. Conquerors.

Crazy game!! Two of my all time favorite QBs @Andersonpassing & @BryanScottQb battled it out!! So happy to see both of these guys back in action!! https://t.co/AQrT0MdlXR

The Conquerors were lead by former Fordham and Orlando Apollo quarterback Kevin Anderson.

What Lead Him Here

I have followed his career ever since he transferred from Marshall to Fordham back in 2014. If you know me, you know that I love small schools. That was right around the time I was beginning to get involved with writing, sports media and such. Anderson stuck out to me because he is a dual-threat, as well as being a great person off the field.

In 2015, Anderson started at Fordham for the first time. Two games later he went on to win the Patriot League Player of the Week award for his five touchdown effort against Columbia.

That would earn him All-American honors. He threw 32 touchdowns, which included back-to-back five touchdown games against Columbia and Monmouth. Using his speed, he ran for 341 yards with a touchdown.

During the 2016 season, Anderson would throw 27 touchdowns to just four interceptions. His 27 touchdowns would lead the Patriot League. That includes a five touchdown bid against Yale. He threw for 2,747 yards and ran for 255 yards with two touchdowns.

During his final year the 2017 season he passed for 1,756 yards, 14 touchdowns and four interceptions. He did miss three games due to an injury. It really would have been awesome to see him have a full last season. If he did, I really do believe he should have been on some draft boards.

Anderson’s first pro journey would take him to Orlando to join the Apollos. He was selected in the Alliance of American Football QB Draft.

I still remember the moment that he got selected I went absolutely berserk like I was the one who got drafted. It was just so great to see him finally get the chance he deserved after all of his dedication and love for the game, while also, being a fan of his for so long.

Anderson would fight for a roster spot between Garrett Gilbert, who is now a Dallas Cowboy, Stephen Morris and Austin Appleby. He earned his spot on the roster with the team letting Morris go.

Anderson would see some action. He rushed for a total of 19 yards on three carries. He wasn’t given the opportunity to sling it, but he was able to showcase that he has wheels. The leagued ended up folding just eight weeks in. His team was awarded the unanimous championship, only losing one game.

He would have CFL opportunities with the Winnipeg Blue Bombers, and most recently the Ottawa Redblacks; who he would’ve commenced play with if it was not for COVID.

In his first 2020 Spring League game, he would replace quarterback Justin McMillan; who looked okay but either way I was stoked to see Anderson come in to replace him in the first quarter.

Anderson was taking hits left and right at times which showed how tough he is. Very early on you can see a big rip in the side of his jersey.

He would complete 10 of 16 passes and throw a laser beam of a touchdown to Michael Bandy.

Seeing Anderson back in action really got my heart back into what I do and why I love it so much. Supporting and exposing the talents of underrated players is exactly why I enjoy what I do. Not to mention, I’m just another person advocating for why they deserve a platform just as much as the next NFL player. He’s played well with the limited opportunities he’s received as a professional. An NFL opportunity could be at the door next year for him.