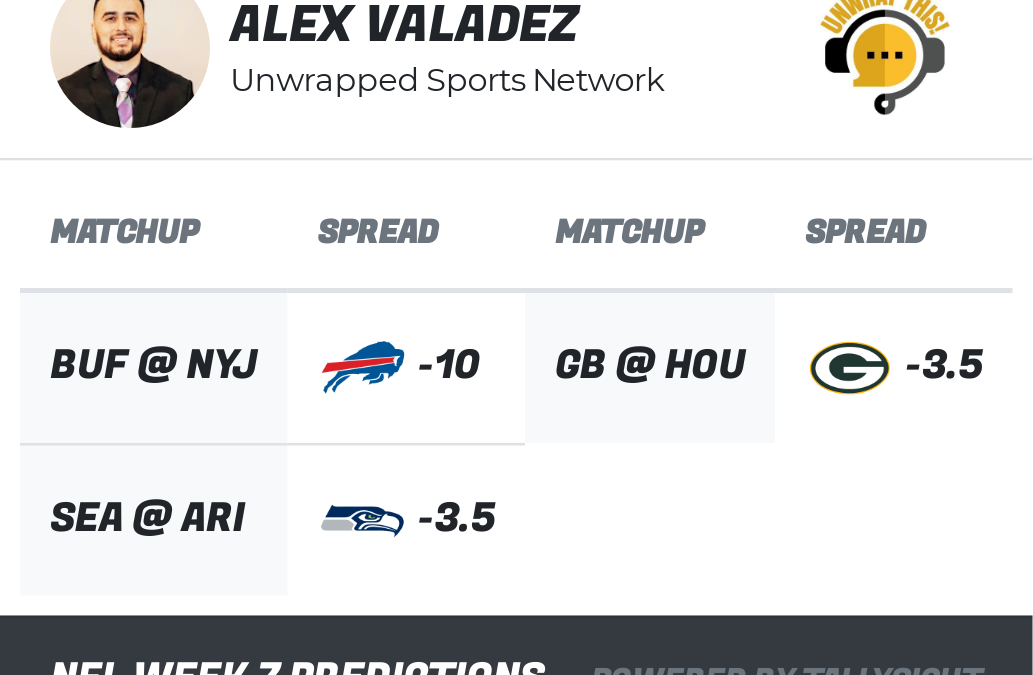 Back at it for round two of my weekly locks for the NFL slate. I went 1-2 last week so rough start but looking for a bounce back week. Be sure to follow me on Twitter for the latest on my player props for each game as well as my top 5 locks (3-2). Let’s get right to business on my picks for the week!

The Seattle Seahawks are coming off a bye to continue their undefeated reign against a Cardinals’ defense that has lost Edge Chandler Jones for the season. Russell Wilson is in the midst of his MVP campaign so expect more of the same as he cooks this Cardinals’ defense all day. The Cardinals had a victory over the Cowboys in Week 6 where they put up 38 points against an ABYSMAL Cowboys’ defense. Kyler Murray completed 9 of 24 passes. Yes, you read that right. That will not slide against the Seahawks. Even with safety Jamal Adams still out – give me the Seahawks with the spread. 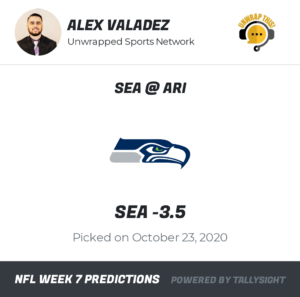 The Buffalo Bills have had a rough two weeks after starting the season 3-0. The Titans are currently undefeated and the Chiefs are one of the best teams in the NFL. It is important for Buffalo to snap this losing streak and against the semi-professional team known as the New York Jets. Jokes aside, the Jets are an abysmal team biding their time until they get lucky enough to select first overall. Josh Allen looked like an MVP in those first two games and I expect him to look the part again against this abysmal defense. Heck, I may even be able to revive my career starting against the Jets. Give me the Bills with the spread. 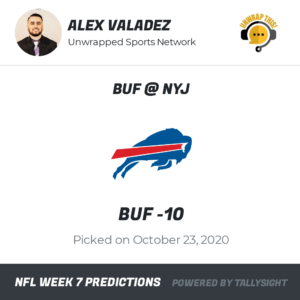 The Green Bay Packers had a rude awakening last week against a Tampa Bay Buccaneers team that looked to be clicking on all cylinders. Expect quarterback Aaron Rodgers and company to get it back on track against a Texans team that has looked a lot better since the brilliance of Bill O’Brien has been relieved of his duties. Defensively, the Texans will not be able to keep up against an offense that won’t have a repeat performance from Week 6. Give me the Packers with the spread. 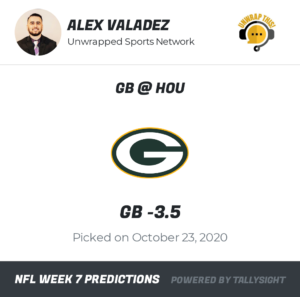 Thank you for taking the time to read this article. Be sure to follow me on twitter @_alexvaladez for my weekly player props and see my full top-5 locks of the week (graphics by TallySight). Be sure to check out Bets Unwrapped on Spotify where fellow Unwrapped Sports director Corey Easley (@cmoney52) and I break down the weekly bets and be on the lookout for our SUPER PARLAY (12-20 leg parlay to win big money). We are going live Saturday 10/24 at 7 PM ET so tune in and ask your questions live. Make sure to check out mybookie.ag and use code USN100 for a 100% deposit match +$15 bonus. Sign up, check out my picks and let’s make some money together! Best of luck and always gamble responsibly.