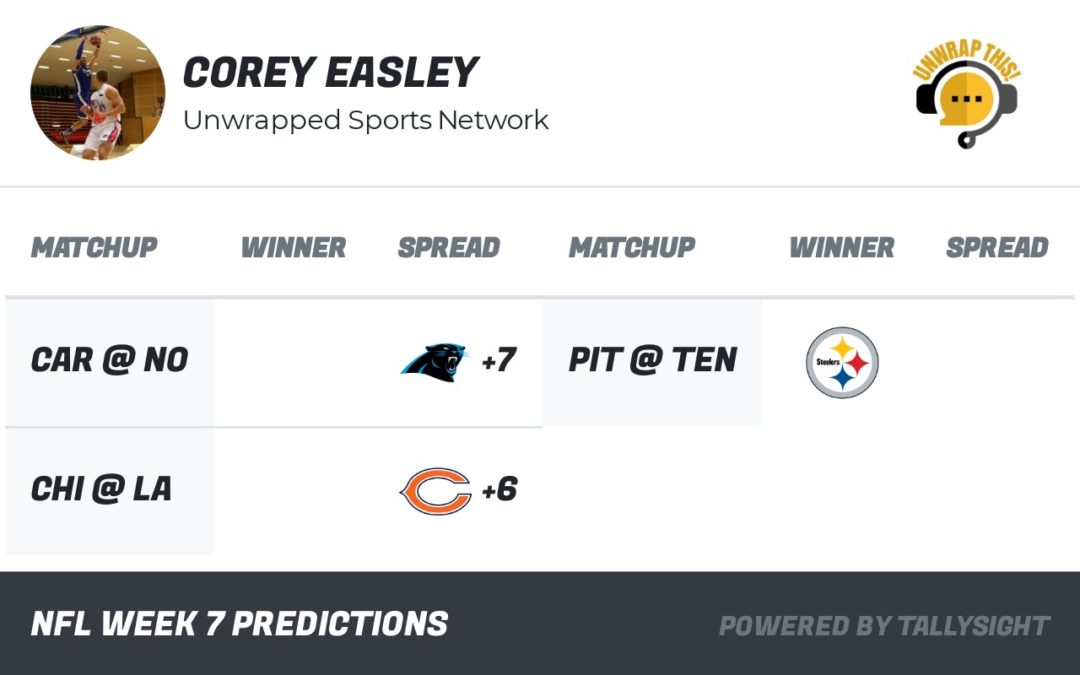 Back to back brutal weeks for me (I went 1-4 last week) so surely I’m primed for a bounce back. Will try and do that for you with some of the best matchups of the week. Underdogs against the spread are doing well sitting at around 55 percent on the year. Also according to TeamRankings.com, there are some outliers against the spread as well. The New York Jets are the ultimate fade team and are 0-6 against the spread but that’s not all as the Dallas Cowboys are also 0-6 against the spread this year. As far as totals go, the New Orleans Saints are 5-0 on overs while the Las Vegas Raiders are 4-0-1. The Arizona Cardinals are 0-6 on overs this year so far. If you like trends there are a couple you can jump on there. As for Week 7 let’s get into it.

What a matchup in Week 7 we have two undefeated teams facing off and both teams were dealt a blow on the injury front. The Titans will be without offensive tackle Taylor Lewan and the Steelers without linebacker Devin Bush. Both are integral parts of what these teams do well respectively and it will be interesting to see who is less affected. The Steelers come into this one ranked No. 3 in team DVOA, according to Football Outsiders. They have been pretty well balanced with a middle of the pack offense and a strong defense. Their opponent the Tennessee Titans are also in the top-10 of DVOA landing at No. 8. However, their offense is one of the best in the league while their defense ranks 22nd. The biggest worry for the Titans in this one is their defense. The Titans get little pass rush and don’t have a good secondary. They do score tons of points on offense and that is what has won them games so far. It does feel as if the Titans are too good to be true considering their woeful defense. The Steelers are good enough to take advantage of this Titans’ defense and if the Steelers defense can hold up the Steelers should be able to pull off the upset here. The Steelers are 1.5-point underdogs but I don’t think you need it — what do I know though…… I was 1-4 last week smh. Tail or Bail.

A division matchup like no other as these two teams have taken a different path than the public would have thought at the beginning of the season. The Panthers have been frisky all year and rank middle of the pack in DVOA so far this season. The Saints are ranked highly and are in the top ten in both offensive DVOA and on the defense side of the ball which is a bit surprising considering the number of points they have given up this season. The Saints find themselves in a precarious spot in Week 7 with several outs on offense. Can the Panthers stop Alvin Kamara will be the main question in this one and if they can they may give themselves a chance to win in a tough matchup? The Saints are the better team but you can’t help but acknowledge all of the drama following the team so far in the 2020 season. I think the Saints win this game but I am going the other way on the line and taking the points.

Speaking of surprises who would have thought the Bears would be entering this contest with a 5-1 record. The Bears’ offense has been abysmal and their DVOA so far is currently at 26th in the league. That being said, the defense has been stellar and is currently fifth in the NFL. Not sure how the Bears are winning but they are winning and that matters in the NFL. The Bears now have an 85 percent chance of making the playoffs, according to FiveThirtyEight. That is remarkable especially when you take into account how poorly the offense has played as a whole. That said they haven’t had the toughest of schedules but as we all know in the NFL it doesn’t matter; winning does. Talk about easy schedules, the Rams fall into that category after laying an egg versus the 49ers last week. Coming off routing the terrible NFL East in previous weeks, the Rams are searching for a key win. Beating the Bears would be a nice sign they are headed in the right direction and the offense will be the key in this one. The Rams’ defense should do enough to disrupt this poorly managed Bears’ offense. The key will be can Jared Goff unlock this Bears defense so that the Rams can continue to have one of the best offenses in the league. That is a tough question and after last week, and to be quite frank since the Super Bowl loss, I don’t have ton of confidence that Goff and this offense can move the ball enough against this Bears’ defense. Look for both teams to cause turnovers in this game. I think the Rams win late but miss out on covering this spread.