Why the Rams Need to Trust the Process at Kicker 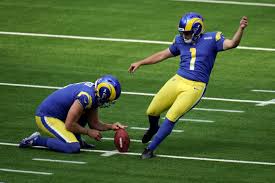 After letting Greg Zuerlein walk last year, the Los Angeles Rams went on to select kicker Sam Sloman in the 2020 NFL Draft during the seventh round.

In training camp, the Rams held three kickers Sam Sloman, CFL vet Lirim Hajarallahu and Austin MacGinnis who played in the XFL for the Dallas Renegades and went 10 for 10 on field goals. Sloman made the cut.

Sean McVay said Sloman needs to improve, but how? Sloman has only been given nine field goals attempts, missing just two with 42 being his longest on the year. Maybe if McVay would not favorite players as a coach and act spoiled all the time he would see Sloman is talented enough to be an NFL kicker long term.

The only ‘bad’ stat so far in his career is the fact that he’s gone 15 for 18 on extra points. With time, Sloman will boot them through all the time just like in college. During his senior year, he went 34 for 34 on extra-point attempts.

Everyone loves to hate Sloman for who knows what reason. Maybe it is cause he is in the big city of Los Angeles, maybe cause he is not Zuerlein or maybe they are just as arrogant as coach McVay. The kid is talented and he has the leg. He drilled a 53-yard field goal as a senior in college at Miami University in Ohio.

Sloman was always a good kicker even throughout college. His 26 field goals made and 30 attempts rank first all-time for a single season. His .867 percentage ranks second in history of the Miami Ohio football program.

McVay and the Rams signed veteran kicker Kai Forbath off of the Chicago Bears’ practice squad yesterday. What this spells for Sloman is uncertain, but probably a battle for his position, and potentially, his roster spot.

Forbath is decent at best. In his whole eight-year NFL career his long is 53 yards. Sloman did that in college. For his career, Forbath has hit 86.8 percent of his field goals but that’s about all that stands out about his game.

It looks like Sam Sloman was barely given a fair chance since he came to the Rams. McVay wants the veteran name and illustrious look. Sloman is good enough. He should be the Rams’ starting kicker for the future at just 23-years-old. Give him a fair chance.