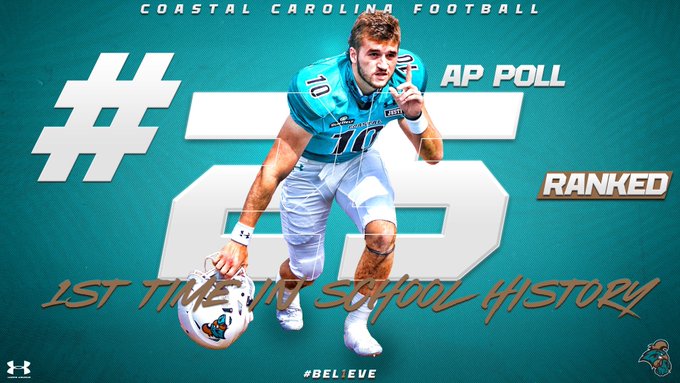 Coastal Carolina has been on an absolute tear this year and last Wednesday night, they knocked off of the previously ranked #21 Louisiana Rajun Cajuns.

This week in the polls the Chanticleers bring home #24 in the coaches poll and #25  in the AP poll rankings.

It’s the first time in FBS football program history that the Chanticleers are ranked top 25. In all honesty, they could be even higher on the polls. They will face Georgia Southern next back back in Conway, SC this Saturday at noon. Back home on the surf turf, bringing home a national rank and tons of energy. A win should be expected behind the young gunslinger Grayson McCall.

Although Georgia Southern comes off a big 41-0 win over UMass. There are some takeaways including it being UMass’s first game of the year, as well as UMass being an independent team.

Especially on the massive connections from McCall to his receivers Javion Heiligh and Isaiah Likely. Heiligh already has four touchdowns and averages 81.4 yards per game. Likely offers great tools as well, he has played in three games. He averages 71.4 yards a game alongside three touchdowns

Georgia Southern quarterback Shai Werts will have his handsful. The Chanticleer secondary is electric.  Cornerbacks Jordan Morris, Derick Bush, D’Jordan Strong, and Alex Spillum all have an interception this year. Jeffery Gunter, the linebacker also has himself a pickoff.

Werts only has 465 yards passing with five touchdowns and a pick. He only has a 58.2 completion rate as well. Two of Werts game were against pretty easy opponents too. Campbell, and UMass.

If the Chanticleers exploit Werts early, they could end it by halftime.

Use McCall as a dual-threat quarterback. He has great legs and a great arm. Use them.

Do not force anything. If held in field goal range, just bring in Massimo Biscardi. He is 3 for 3 on the year. Two of those from over 40 yards including the game-winner last game.